I thought we might need sandpaper as a palate refresher, rather than the customary French Bread....but host Alex Hoeppen (right photo) assembled a good set of Nebbiolo wines representing the full spectrum of styles....old schools, modernists and sloppy schools of winemaking. 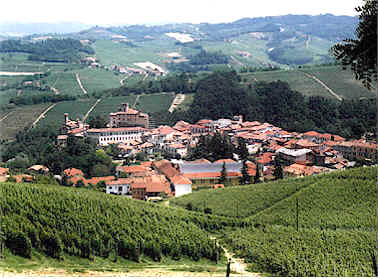 Recent harvests have been very promising in Piemonte.  The 1996 vintage was very fine.  The 1997 vintage provided big, ripe, deeply-colored wines of extraordinary fruit.  The 1998 vintage is regarded by the winemakers as not quite as good as its two predecessors, but certainly above average.

We tasted wines of the Nebbiolo d'Alba denominazione (don't confuse these as "declassified" Barolo or Barbaresco wines, please) as well as some "Roero"-designated wines (Roero D.O.C. wines must be 95-98% Nebbiolo as a minimum and the rest can be the local white grape, Arneis). 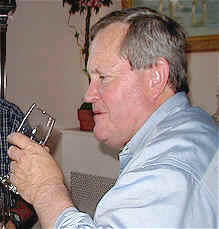 8th Place:  CANTINA ISNARDI 1996 Roero
Though modestly-priced, this wine was beyond "old school" winemaking.  This would be most kindly described as "rustic."  Old, feeble, weak red wine which fits the stereotype of Italian wine.  The outspoken Mark Naismith was disappointed this wine did not have 13 last place votes.

7th Place:  STEFANO FARINA 1998 Nebbiolo d'Alba
Displaying some attractive berry and violet fragrances, this wine is moderately rich with a modest tannic bite.  I gave it a one star (out of three) rating. 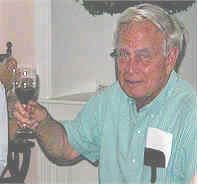 Mildly earthy with a note of cherry-like fruit, this is a good example of basic Nebbiolo.  Medium-bodied, standard flavors echoing the nose with a bit of tannin.  One judge (photo on the right) rated it "Damn, that's good!" and gave it a first place ranking.


5th Place:  CASCINA CA' ROSSA di FERRO ANGELO 1999 Roero
Having some up-front berry fruit, a hint of orange peel and a spice note, this Roero is a bit astringent, but certainly a solid and typical example of Nebbiolo.  One star.

4th Place:  LUCA ABRATE 1998 Nebbiolo d'Alba "Bricco Rotondo"
With fruity aromas of apples, a bit of tar and some wet earth, the wine is, at best, of standard quality. Not unpleasant.

3rd Place: CASCINA VAL DEL PRETE 1998 Nebbiolo d'Alba "Vigna di Lino"
Hints of berry fruit and a suggestion of a violet fragrance on the nose....the wine is significantly bigger and richer on the palate than you might imagine from the nose.  The tannins are such that aging this for a couple of years would not be out of the question.
One-and-a-half stars.

The sad news of the day is that owner/winemaker Matteo Correggia just died this past week in a horrible tractor accident.  The 39 year old Canale resident leaves behind a legacy of fine winemaking.
The fragrance of this wine is very complex, with plums, prunes, earthy notes and a touch of oak.  The tannins match up nicely with the fruit, balancing very well.  Better than some Barolo and Barbaresco wines.  Two stars.

While this was the runaway winner of the tasting, I can appreciate the critics who might argue this wine is all flashy oak and difficult to identify as any particular grape variety.  In this tasting, being the only wine of this style, the wine won handily.  Lots of sweet, oaky, vanillin notes to the nose and the same elements are found on the palate.  Of course, you need a certain amount of fruit to make this work.  While the wine succeeds at being a fine example of "internationally-styled red," I was unable to say this is, indeed, made of Nebbiolo.
Mark Naismith was disappointed this wine did not have 13 first place votes.
Two stars.