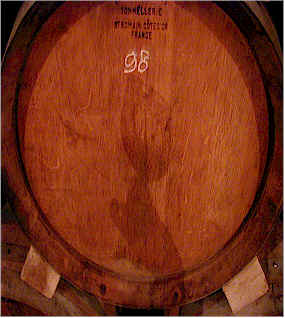 In pointing out how young some people are, it's been said that today's youngsters have lived only with color television and push button telephones.  They never knew the days before TV or when televisions were only available in "black and white."  Or when you had to physically 'dial' the phone.

This, then, has me thinking: there's a whole generation (or two or three) of California wine drinkers who don't remember the days before Merlot.    And, yet, I can remember tasting the very first Merlots from California!  What an old dinosaur I am!!

Cabernet has been around for ages.  Merlot is a relatively recent phenomenon here in California.  The same can be said for Washington State as well.  Interest in this variety began in the early 1960s.   Louis Martini bottled the first varietal Merlot, blending 1968 and 1970 wines from their Edgehill property.  It was certainly a pleasant bottle of wine and encouraged others to take a look at this grape.

Merlot tends to ripen earlier than Cabernet Sauvignon, so it can be less risky to grow most vintages.   In Bordeaux, of course, it is a component in the wines of the Medoc and Graves regions, while the primary grape in St. Emilion and Pomerol wines.  Merlot is an important variety in Italy's Friuli, though it is now grown in Tuscany, Umbria and elsewhere.  While we see a lot of Chilean wines labeled as Merlot, some claim there are not as many vines of Merlot in Chile to produce all the wine sold under this banner.

California winemakers took to Merlot in their attempts at imitating the wines of Bordeaux.   They'd read of the Bordelaise blending Merlot with Cabernet.  And they'd seen the lofty price tags on many Pomerol and St. Emilion wines, not to mention the Cabernet-based reds of the Medoc and Graves.  I always ask winemakers (or their representatives) why they choose to blend Merlot into their Cabernet Sauvignon wines.

My cynical view is that the reason is, mostly, because it, at least, years ago, gave the marketing people something to talk about.    In fact, I asked one winery principal why they blended Merlot into their Cabernet and she responded that it "adds body to our Cabernet Sauvignon."  I was curious about this.   Usually Cabernet is bigger than Merlot.  She stumbled around for an answer (most "retailers" know very little about wine and she could babble incoherent wine-speak elsewhere, I suppose) and left, embarrassed.  We didn't see her again for another 2 or 3 years!  One producer of Napa Merlot told me, however, that he does blend in some Cabernet Sauvignon to "soften" the Merlot...his Merlot vineyard produces a wine which is more tannic than most Cabernets!

Another Napa winemaker told me he thought his best wine was the 100% Cabernet Sauvignon he produced.  He did, in fact, blend Merlot in to their lower-priced Cabernet especially for the marketing people.  "My Cabernet is smooth enough to not need further softening with Merlot," he explained.

A couple of points about Merlot:  It ripens earlier than Cabernet Sauvignon and it produces a larger crop than Cabernet.  This latter point makes the price of so many Merlots questionable.  It is not uncommon to see the Merlot from a California winery carrying a higher price tag than the same producer's Cabernet!
Supply and demand dictate pricing.   It is not, necessarily, a quality issue.

With the price of Merlot so high today, we see many wines which show evidence of coming from over-cropped vines.  Next time you're tasting Merlots, try to remember to look for herbal, vegetal or leafy notes in the wines.  These are usually signs of immature fruit and this can be, though not always, a sign of over-cropped vineyards.

Thanks to the movie Sideways, many people are switching from their favorite Merlots to Pinot Noir.

That's partly in response to wine geek Miles Raymond's little tirade outside a restaurant as he and his buddy Jack are about to dine with Maya and Stephanie.
"If anybody orders any Merlot, I'm leaving!  I am not drinking any fucking Merlot!"

Merlot, in capable hands, can produce a wonderful and soulful wine.  But much of what is made in California is rather mundane, cookie-cutter wine.  Some are more like "Cabernet Light."

I was amused in receiving an offer from an importer for a nice little Bordeaux wine.

This micro-cuvee of 500-600 cases of 100% Merlot offers exotic pain grille notes interwoven with lavish quantities of black, blue, and red fruits, an unctuous texture, and beautiful purity as well as length. Full-bodied with velvety tannins as well as extravagant fruit, it should drink well for 20-25 years. Sadly, most consumers can neither afford nor find this stunning Pomerol.

I sent the importer of this wine a note saying we have a nice Chilean Merlot which answers to this description, except that it's drinkable now and has a shorter life span.  I suggested I would bring some racks of lamb and a bottle of my little $12.99 Chilean wine and he could open a bottle of the scarce Bordeaux...The Pomerol wine from France is offered for $1699.00 per bottle and earned a potential rating of 93 to 96 points.
I think the thirteen-buck Merlot got a 90-point score from the same critic.