When the calendar page turns to June that means the baseball season is in full swing, happy people in San Francisco parade down the main boulevard and Anthony Dias Blue arranges a weekend of wine-tasting that's unmatched in the United States.

I knew Andy was popular and several other wine-tasting judges and I moseyed on down to see just how San Francisco welcomes Mr. Blue with open arms.

This fellow, I believe, was on the fruit wine panel.

The "business" of wine-tasting is befuddling to some people, but it's really quite simple.

Our panel tasted close to 300 wines in two days of judging.  We sniff, sip (sometimes) and spit (always) in our search for the best wines.  "Down" for some and "Up" for others.
Amongst the "Up," we separate the wines into "Bronze," "Silver," "Gold" and "Double Gold" medals.

So we forged on, straight ahead, so-to-speak.

Andy Blue is so revered in these parts, even the traffic department has honored him with a "zone."

Happily, this tasting takes place on a weekend.

I missed taking part in the Judge's Dinner, a Friday fest where Andy routinely talks his typical "Blue Streak" and introduces all the judges.
Tim McDonald brought some supremely scary Halloween masks which he tested on little kids and small animals outside the hotel.

Anyway, I missed his "performance" which reportedly left Andy Blue red in the face.
As our local baseball team is fond of saying "Wait 'til next year," so hopefully I'll catch the 2007 version of this speech.

Bright and early Saturday morning, the "volunteers" are slaving away, organizing the wines and preparing for the tasting marathon.  The judges assemble and have a shot of caffeine.

Here's Steve Pitcher reading the comics to Kimberly Charles, who's quite interested, as you can see, in the latest escapades of "Zippy the Pinhead." (Steve likes to call this "Zippster der Pin-kopf.")

The New York Times' Frank Prial provides some "Wine Talk," explaining his theory about California Chardonnays.
"The constant seismic activity in the Golden State allows vintners to 'battonage' the wines on a regular basis."
Just before we took our places at the tasting table to evaluate "Chards, Cabs and Zins," Mr. Prial led the assembled judges in a Decantation "prayer," besieging Bacchus for a "plethora of gold medals."

Tim McDonald, who always gives wines good scores when they have "nice legs," then assumed the role of Anthony Dias Blue, exhorting the judges to "go for the gold."
Tim was wearing his kilt in hopes of finding wines that "blow up my skirt."

I'm not entirely certain of what that means and I don't think I want to know, frankly.

And with the morning "prayer session" over, we went to taste the first flight of wines.

We fasten our seat belts and prepare for the twists and turns in the road.

I'm on Panel "H," once again teamed up with Patrick Comiskey,  the Wine & Spirits Magazine "Senior Editor," Katie Ballou Calhoun and the "Georgia Peach," Jane Rate (who's got the perfect name for a wine critic).

Our coordinator, Barbara, sets 'em up for the Senior Comiskey.

Katie Ballou-Calhoun of Calhoun & Schwartz Communications tastes through a set of Viognier wines.
"You say poh-tay-toe,
I say poh-tah-toe,
You say Kay-tee,
I say Kah-tee,
Potayto, Potahto,
Kaytee, Kahtee,
Let's call the whole thing off...
You like American oak,
I like French oak,
You like Chardonnay,
I like Viognier,
American oak, French oak,
Viognier, Chardonnay,
Let's call the whole thing off..."

Jane was busy Rating the wines.

Those old Chardonnays rarely get gold medals, yet we taste them anyway.

Gillian was looking for well-Ballanced wines.
Gillian Ballance of the Plumpjack Group.

This panel, along with others, was advised to "stay on the trail" of good wines.

Rusty demonstrates his senses of smell and taste are anything but rusty.
Rusty Albert of San Francisco's Wine Impressions.

Michael Hantman of Wine Tasting of Sonoma County.  If you're in the town of Duncan Mills and looking for a bottle of wine, Michael's "da man"!

Another flight of wine waits in the wings.

Lisa Weeks, who's been waiting for months for this tasting, was quoted as saying "TGIC!" when she was presented this flight of wines.
"Thank God (that would be Andy Blue, by the way) It's Cabernet!"
Lisa Weeks of TGIC Imports

The official report on Liza Zimmerman, DWS, is that she's admittedly "The child of a stubborn woman."  The DWS means "dedicated wine sampler," I think.
Liza's motto is "Quaecumque sunt vera" which means "Whatsoever things are true," a tongue-twister she learned while attending Northwestern University in Chicawgo before heading for New Yawk City.  This spirited gal has been writing for the Seattle Weekly, covering the world of cocktails and drinks.

Ronald Siragusa, wine director of Kuleto's in San Francisco had his hands full in tasting with Lisa and Liza.
"You say Lisa, I say Liza,.." 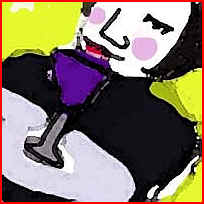 Deborah Parker Wong of Patterson's Magazine is routinely nosing around the world of wine.
As you can see as plainly as the nose on your face.

Ann Littlefield knows all the logistics in wine judgings, from L'East Coast to the Best Coast.

Gary Blackwell of Blackwell's Wines & Spirits in The City.
Gary is busy separating the "fun wines" from the "funny wines."

Meanwhile, back at Panel H, Patrick Comiskey has tasted some less-than-medal-worthy wine, apparently.

Our panel does not favor pedestrian wines.

Steve Pitcher is the only one of our merry band of tasters to own a "Verdienstkreuz am Bande des Verdienstordens der Bundesrepublik Deutschland."  Steve is also the only one of our ensemble who can even pronounce it.
Herr Pitcher writes for The Wine News and other journals as well as being active in the German Wine Society.
I overheard him asking one judge "Do you like Riesling?" and she responded by saying, "Well, Steve, I've never Riesl-ed."

Denise Johnson was told we would be participating in a blind-tasting.  For some reason, she had her eyes shut while evaluating this flight of wines, saying "I'm tasting blind, but not blindly tasting."

Carl is usually presiding over things at Town Hall in San Francisco, but this weekend he was grubbing around looking for gold medals.
Carl Grubbs of San Francisco's fine eatery, Town Hall.

Carol Seibert keeps the show "on the road" even with so many "off-the-wall" characters.

Carmen Mir-Andy is quoted as saying "I have a huge disdain for those artists who say that they don't need a prize to have their talent recognized."
Andy Blue says the same thing and urges vintners to enter their wines in next year's competition!

Frank Prial is looking to roll out a barrel full of medals in tasting this weekend's wines.  Here's "Cabernet Frank" evaluating a full-throttle, blockbuster-of-a-red that's sexy and has gobs of fruit.

A few judges were concerned, having read reports of massive deforestation in a move to oak the hell out of new vintages.

Brace yourself and  roll your mouse's cursor over the following photo.

ON TO THE NEXT PAGE
If you dare!