We are pleased to welcome adults who've been Double-Vaxxed to our reopened Tasting Room.

Tasting Hours are 12pm until 5:45pm.  Monday through Saturday. 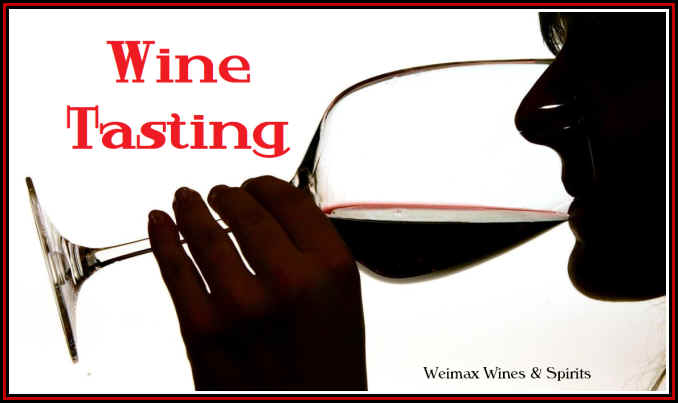 Lagrein is such a cool grape...it can be made along the lines of a Beaujolais or styled like a
Pinot Noir or, if properly-farmed for such a wine, as big as a Cabernet Sauvignon.

Producers in the Alto Adige used to over-crop their vineyards, making wines which were
good enough to sell to bus-loads of German and Swiss tourists, but not good enough to
export.
Now, much more enlightened about making high quality wines, the region is a treasure trove of
good bottles.

Elena Walch bottles a young Lagrein which has the charm and allure of a delicious
Pinot Noir.  The 2020 just arrived and it's a medium-bodied, gentle red wine with
bright red fruit character and a suggestion of a wood note (well in the background).

You can put it on the table in place of entry-level bottles of Pinot Noir.

Poe is a tiny winemaking enterprise powered by a young lady who's been fascinated
with ravens and the works of Edgar Allan Poe.

The fruit for this light red comes from the Van der Kamp vineyard in Sonoma and
it's entirely Pinot Meunier...light in color as you can see.

The aromas are decidedly different from Pinot Noir, but this is as light and
supple on the palate as a Pinot Noir.

Working at different Barolo wineries, they teamed up to launch their own micro-winery,
Lalł (Lara Rocchetti and Luisa Sala).

They made something like 200 cases of this lovely Nebbiolo...young vines in the Barolo
appellation, part in Monforte and part from La Morra.

It was matured for less than a year in Austrian oak.

The Lafóa label is used by Colterenzio for their premium bottles from a special
vineyard site near the winery in Italy's Alto Adige.

Half the juice was fermented in stainless steel tanks and the other half
saw its vinification in barrels and puncheons.

This is a remarkably intense, complex Sauvignon Blanc, made of some French
clones and produced along the lines of top French white Bordeaux.

It's an exceptional dry white.

From a smallish family estate, this property is now run by Eric Bonnet whose parents founded the property
with but a scant few hectares pf vineyards.

These days they cultivate about 50 hectares of vineyards.

The 2019 Chāteauneuf-du-Pape is a delight, avoiding the over-ripe, dehydrated fruit aromas and
flavors of so many wines from the Southern Rhōne.

This is predominantly Grenache with 10% Syrah, 7% Mourvčdre and 3% Cinsault.

We like the red berry fruit and the underlying spice and herb notes.

We have their entry level bottling at $21 and a few higher-tier wines,
too.

This one is in the middle and it's an elegant rendition with the classic
bouquet of American oak.

The 2014 vintage was a challenge and so the fruit that usually goes into
the more expensive bottlings went into this.

Five percent Graciano and 95% Tempranillo...several years in American
oak and then some years in bottle...this 2014 is a recent arrival.

His wine is a delight!  Toasty, creamy and full-flavored...

From the Walker Station vineyard in a cool-climate site in Sonoma, this is a
most enchanting young Syrah which, if given sufficient bottle aging, will rival
seriously good French, Northern Rhōne Syrahs.

It's but a small percentage of California Syrah wines which make the cut
here, as so many are from warmer regions where they lose that
special character of the Syrah grape.

It's been a decade since we've had a Cabernet from L'Ecole 41 in the shop.

The winery is one of the early producers in Washington State's Walla Walla region.

It's made entirely of Cabernet Sauvignon and was matured in about 25% new oak barrels.

This is showing quite handsomely and it's one of the best buys for Cabernet
from West Coast vintners.

We loved the white Bordeaux from Smith Haut Lafitte, but now that it's north of $100/bottle
(closer to $150 these days), we've looked for alternatives.

The crew at Delille are also fans of Bordeaux wines and their Chaleur Blanc often hits the mark.

The 2020 is exceptional and displays the herbal notes we like in Sauvignon Blanc and the texture
of the Semillon.  They use a fair bit of new French oak so there's a rather woodsy
character here, too.

Gros Ventre is a small winery in Sonoma's town of Windsor.

They make a cool red blend called High Country Red and this is based on
Gamay from El Dorado County in the Sierra Foothills with Pinot Noir
from Sonoma.

This is a good blend that in France's Burgundy is called Passetoutgrain.

The modest percentage of Pinot Noir seems to dominate on the nose,
displaying the classic cherry-like notes of that grape.
It's a medium-light to medium bodied red.

The Ojai Vineyard has sourced its Sauvignon Blanc from the McGinley
Vineyard for close to 20 vintages.
Instead of buying grapes by-the-ton, winemaker Adam Tolmach pays
by-the-acre and then directs the farming to focus on grape
quality rather than a bountiful yield.

Less is more if you're farming for quality.

Ojai's Sauvignon Blanc is vinified in seasoned French oak barrels and
they capture melon-like fruits with a hint of lime.

It's dry, of course.

Washington's Woodward Canyon winery is another Walla Walla pioneer
and they routinely make some exceptional wines.

This is their 28th "Artist Series" bottling.

They aged this in 28% new oak, so the woodsy notes add a bit of
complexity to the blend.

We had routinely found the wines from Peju to be perfectly ordinary...technically
well-made but lacking the excitement factor.

When we tasted their current line-up we asked the winery rep if they had, perhaps,
hired a new winemaker.
He laughed and explained the second generation is now running the show and they
have unshackled the winemaker and, voila!

Their Merlot is particularly good and we are presently able to offer for a price
well below the $60 cellar door cost.

Here's an exceptional vintage of the Portuguese red made by the
Symington Family (Graham's, Warre's, Dow's, Cockburn's, etc.) and
Bruno Prats (formerly of Chāteau Cos d'Estournel in Bordeaux).

They make a high-end bottling called Chryseia which goes for
close to $100/bottle.

Then there's this remarkable bottle called Post Scriptum
which is sale-priced at $24.99.

The 2019 is a recent arrival and this is exceptional.

It pairs with Cabernet Cuisine but you'll have trouble finding
a Cabernet or Bordeaux of this caliber for $25.

They had been labeling this as "Lalande Borie," but this vintage chose to
rename it as "Le Petit Ducru," a secondary bottling from the famous
Chāteau Ducru Beaucaillou.

We included the 2018 in a blind-tasting of 2018 Bordeaux and it was
our first place selection.

This is 60% Merlot with 40% Cabernet Sauvignon.

It's quite dark in color and the black fruit elements are terrific.

Light garnet in color, the fragrances of this wine leap out of the glass
and are easily identifiable as Pinot Noir.

Bright cherry fruit and a touch of sweet oak make for a wine of
great complexity and yet it's well-priced.

They claim to have made less than 10 or 11 barrels of this
Dutton-Perry Ranch bottling.

Here's a nice little Sonoma white from our friend John Buehler
and his family up in the eastern hills of the Napa Valley.

The wine is a bit of a throwback and there's a hint of wood
and the wine is dry and appley.

The 2020 vintage from winemaker Rob Lloyd is a classically
Californian take on Chardonnay.

Many fans of Rombauer have enjoyed Lloyd's wine and
this 2020 is a showy, flashy wine.

Wines from this small cellar in the Sierra Foothills have long been favorites
here.  Winemaker (and Giants' fan) Jeff Runquist produces a remarkable
array of red wines.

We often see them when judging the San Francisco International Wine Competition
as there are often one or two in the Sweepstakes Tasting on the final day
of the judging.  His Lagrein was selected as the Best Red Wine of the tasting this
past year.

His Zinfandel is a delight...dark in color and intensely berryish.  There's a modest
amount of oak spice and sweet fragrances from this wood aging.

It remains well-priced, too.

We had the 2018 of this wine in two blind tastings of Cabernets last year and this was
our top wine in both.

Phil Titus and his brother have vineyards in and around St. Helena and they make
a nice range of wines.  His day job is that as winemaker at the Chappellet winery on
Pritchard Hill.

It's a really inky red wine, with youthful purple tones and plenty of dark fruit.
There's a nice bit of oak here as it was matured in French and Hungarian barrels.
Something like 60% of the barriques were brand new.

The 2019 is equally showy...dark fruit, teeth-staining and yet easily drinkable in its youth.

They distinguish themselves with their work incorporating Pinot Bianco.

We visited the cellar a few years ago and they still had a tank of 1979 Pinot Bianco that is a
"work in progress," awaiting bottling one of these years!

In early June we splurged and bought a bottle of their "Rarity" Pinot Bianco...2007 vintage and
it's fairly recently bottled.

This was a magnificent wine, but it's price for its scarcity: $180/bottle!

A few days later we popped the cork on a few wines we'd bought in hopes of making a
discovery and this 2019 "Terlaner" was exceptional.  Not only that, we can buy more than
six bottles of this compared to one of the Rarity!

The Terlaner appellation is a bit obscure, but it's a white wine blend based on Pinot Bianco
with Chardonnay and, in this case, Sauvignon Blanc.

It's mostly fermented in stainless steel, but about 20% of the juice is vinified in large wood to
add a bit of complexity.  Happily, the wood is not prominent here and the wine displays the
bright, appley and peachy notes of Pinot Bianco and Chardonnay.

The Zahel winery is located in the Vienna area and it is the reference point for a rather curious and
obscure grape variety called "Orange T," or Orange Traube.

Don't confuse this with the category of white wines vinified with the skins which are known as
"Orange Wines."  Those can be all over the map in terms of grape varieties and styles, with
some being rather odd and tannic.

The grape called Orange T has typically been incorporated into the popular field-blended white
wines known as Gemischter Satz.  Zahel thought it has an interesting personality and began
vinifying it on its own.

Today Zahel's Orange T is a benchmark for the grape.

We currently have this 2019 vintage in the shop and it's a delight.  We liked the 2018, too,
but Ellen noted this one is more intensely fragrant and beautifully crisp and dry.

Weinbach is an elite domaine in France's Alsace region and the Faller family put this place on
the map in the 1970s and 1980s.

The wines are routinely a statement in elegance and balance.

This 2018 is beautifully aromatic and fruity...there's a hint of sweetness but it's only a
mere hint.

The 2020 has been wildly popular...everyone who tastes this buys a bottle (or two)!

This is routinely one of our favorite, off-the-beaten-path dry white wines.
We brought a double magnum of the 2016 to dinner during the
San Francisco International Wine Competition and it was a hit with the
judges (from all over the world, too).

We brought this vintage recently to dinner with some friends at Dumpling Time in
San Francisco...thoroughly delicious!

Stony, nicely fruity with a hint of a spice note...

A fantastic example of the Pecorino grape...certainly this will appeal to you if
you're enchanted by crisp, non-oaked Sauvignon Blancs.

This is yet another great, flavorful alternative to the "water" that
many commercial cellars bottle as "Pinot Grigio."

CASTA DIVA MOSCATEL  "Cosecha Miel"  $5.25/taste
Hugely famous in Portugal and around Europe, they're a mystery to most
wine consumers in the US.  Remarkable wine, though.

GRAHAM'S 2006 "MALVEDOS" VINTAGE PORTO $6.50/taste
The Malvedos bottlings from Graham's are routinely very good and this is showing beautifully!