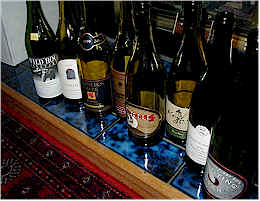 The 1999 vintage in California was one which tried the patience of many wine growers.  The summer was cool and by September, the fruit was still low in sugar and high in acidity.  Some warm spells pushed sugar levels a bit, though acidity remained fairly high.  This is where the skills of the grower and winemaker come into play.  It's important to taste the fruit to assess its maturity or development.  Gauging the ripeness solely by sugar and acid might mean you've picked fruit which hasn't developed enough character to make a profound wine.

We included the winner of the most recent Weimax Pinot tasting, Seghesio's "Keyhole Ranch" bottling, along with a few other wines from producers who, for the most part, have prices in the realm of reality.  The tasting proved to be quite good, as there were no "stinkers" in the group (I'm referring to the wines, not the participants). 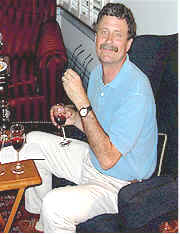 
8th Place:  ZENITH VINEYARDS 1999 "Reserve" PINOT NOIR
One taster wondered why a television manufacturer was now making wine.  Perhaps this explains the poor reception this wine received from the tasters.  The "odd duck" of the group, this wine had lighter color and higher acidity than the rest of the group.  The fragrance was reminiscent of sweet oranges and spices, with a hint of pepper.  The citrusy flavors are, actually, rather pleasant.  This would be a good wine to pair with Mediterranean/African cuisines which incorporate sweet spices and raisins.
One-half star (three star scale).

7th Place:  SHOOTING STAR 1999 Mendocino PINOT NOIR
There's no real flaw to this wine, save for its intensity, or lack thereof.  I detected a hint of mint and some woodsy fragrances.  On the palate it displays a faintly cherryish note.  Standard quality and no better. 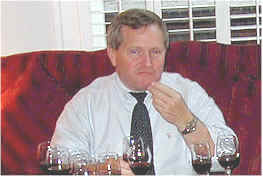 6th Place:  PEDRONCELLI 1999 Dry Creek Valley "F. Johnson Vineyard"
Pedroncelli's single-vineyard bottling has lots of strawberry and cherry fruit, not unlike some robust Beaujolais wines.  Good flavors confirm those elements found on the nose...this would be a nice warm-weather red.
One star.

5th Place:  CUVAISON 1999 Carneros/Napa Valley PINOT NOIR
Berryish fruit with a smoky, woodsy note to the fragrance of this medium-bodied Pinot.  Sweetly-oaked, this is in the above-average range.  One-and-a-half stars. 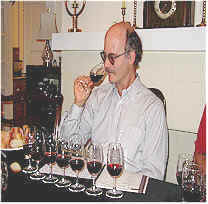 3rd Place:  SEGHESIO 1999 Russian River Valley "Keyhole Ranch" PINOT NOIR
Mildly cherryish with some sweet oak and a hint of a fragrance which reminded me of band-aids.  Still, I thought it was okay.  The tannin was more evident in this wine in this particular line-up than in our tasting a few weeks previous.  One star.

2nd Place:  CARNEROS CREEK 1999 Los Carneros "Las Brissas Vineyard"
Though they've been Pinot Noir specialists since the inception of this winery in the early-to-mid 1970s, I can't say I've viewed Carneros Creek as a source of much interesting wine.  Though the most costly wine of the tasting, I felt this was very nice, showing toasty oak and an attractive woodsy quality.  The oak comes through on the palate, showing some style and depth.  Dark red fruit character completes the package.  Four to eight years of cellaring potential.  Two stars.

1st Place:  WILD HOG 1999 Ryer Island "Stewart Vineyard" PINOT NOIR
Lots of cherry and dark red fruit fragrances and plenty of sweet, toasty oak make for a very attractive perfume.  The cherry and vanillin elements weigh in on the palate in this very showy Pinot Noir.  The wine ran away from the rest of the pack in this line-up, hogging first place honors.  Drinkable now and over the next year or two.  Two stars.