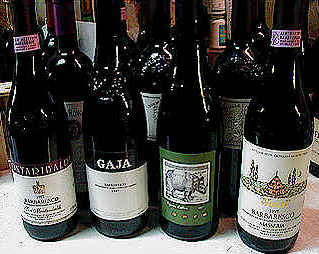 The growing season in 1997 got off to an early start and warm temperatures throughout the summer allowed growers to begin the harvest far earlier than normal: around the second to third week of September, finishing picking before mid-October.
Winemakers had ripe, healthy fruit to work with, so those not making good wine should be looking for other lines of employment. 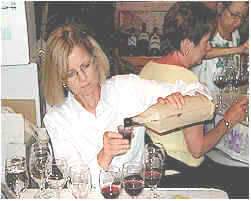 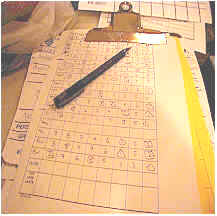 8th Place:  CERETTO "Asij" or "As"
Not many positives for this famous winery's Barbaresco, as the first critic felt "it's starting to turn."  Another echoed this sentiment, noting this is "past its prime and somewhat medicinal in character."  Someone else described it as "candyish, sweet orange, low in acidity, yet high in tannin...bitter, with a soapy finish."  Another individual pegged it as "waxy, with stewed prunes, tobacco, high in acidity, pleasant but hollow and the tannins shorten the finish."
I found this older, traditionally-styled Barbaresco to have some sweet notes with a touch of jammy fruit and a hint of anise.  It's shallow and astringent, with bitter tea flavors.  Thoroughly disappointing and not very charming.  If you'd like to taste a relatively dead, old wine and can forgive that it's not 30 years old, it only tastes like it's decrepit, then here's a bottle for you.

7th Place:  PODERI COLLA "Tenuta Roncaglia"
"Dull cherry fruit with a light and sharp finish." were the words of one taster.  Another found it even less appealing, characterizing this as being "skunky, moldy, dirty, earthy and redolent of well-used gym shoes."  Someone else of a more positive viewpoint described this as "boring."  One taster, a farm boy (apparently) found "silage and black cherry with some funky notes though I'm not as offended as others."  You won't see a description on a back label telling you a wine smells like "bug spray," (making it a multi-purpose liquid), but one taster found it to have a fragrance reminiscent of insect repellent.
I found a mildly earthy fragrance with lightly leathery notes and some weedy, gamey elements.  It's typically astringent and aggressive, being a decent example of a traditional, old style of Nebbiolo-based Piemontese wine.   I'd give it single star on a three star scale.  Eight to 12 years of aging potential, too, if you like this sort of wine.

6th Place:  MICHELE CHIARLO "Asili"
"Old school, rustic Barbaresco with baked cherry notes.  It should be more fleshy and rich." said a critic.  Another taster agreed, adding this has some leafy, moldy notes with hints of mushrooms and perhaps the leathery notes of Brettanomyces (a wild yeast which gives a wine a suggestion of 'saddle' or 'leather' notes).  Another taster found this to be somewhat reminiscent of Pinot Noir and characterized it as "delicate."  Someone else found "vegetal and spice notes."
My notes indicate a mild eucalyptus fragrance with a touch of wood...definitely an herbal quality.  It's a shade lighter than most of the others, but a well-done, traditionally-styled wine with tobacco, resin, herbs and some aggressive tannins.  One-and-a-half stars.

The first taster offering an opinion felt this wine "improved in the glass, getting better with the second pass through the line-up."  Another criticized it as being "over-pressed, over extracted tannins."  One person found it to be "all structure and no stuffing."  Someone else found the Vietti wine to have a tobacco-like character.  Another said this was "more ripe than the others and the tannins cut short the finish."  One defender felt this was "fruity and had the best taste of this set."  Another offered it's "fruitier and riper than most."
I found a lovely, root-like, berryish character, not unlike some French Burgundy wines (and one or two Central Coast Pinots, especially those of Talley Vineyards).  There's a hint of pencil shavings here, too.  The flavors show very nice fruit, big, rich and well-stuffed with root notes, black fruits and the hint of oak.  Very fine.  Two stars.

4th Place:  MICHELE CHIARLO "Rabaj"
"Good color, well-balanced and medium-bodied." said one of the participants.  Another felt this was "more tannic than the rest, but it was still okay."  Another person who liked this because it's "distinctively different."  Someone felt it had "light wood and a vanilla-like note."  One taster, less enchanted, said it's a "Ghost of Barbaresco, mild, simple and light."
I found Chiarlo's Rabaj to be similar to their Asili bottling, with a resin-like note and some woodsy tones to the nose.  Ripe fruit.  It's tannic, young and powerful, with black fruit flavors and a bitter, cocoa finish.  Eight to 12 years of aging.  One-and-a-half stars.

"The aromas got me very excited with anticipation of something great, but it didn't fare as well on the palate." said one critic.  Another had a similar take, saying "It had a great fragrance but it fell apart and then came back."  One taster was offended by the astringency, saying "If you can get by the tannins, this is great!"  Another fellow pegged this as "A very nice California Cabernet Sauvignon."  Someone else described it as having "lots of blackberries, smoked meat fragrances and a hint of nutmeg."  Another nailed it as being "viciously tannic," while someone else said it's "clumsy, big and rich." (I think they were describing the wine, not Angelo Gaja.)
I liked the cedary, woodsy notes of the fragrance and found this to be quite complex.  The wood notes are not as "sweet" as the two wines which tied for first place.  Still, it's close to perfection in my book.  Going back after the tasting, I found those Cabernet notes one taster mentioned during the critique.  It's full, rich, complex on the palate, with a refined elegance uncommon in wines made of Nebbiolo.  Two stars, plus.  Five to twelve years of aging potential.  Maybe more.

2nd Place: (Tied for 1st)  MONTARIBALDI "Sor Montaribaldi"
"More spicy notes on the nose and palate which cover the fruit." said the first critic.  Another marked this down, feeling the "fruit was muted and this is nothing special."  Others disagreed, one taster finding "terrific wood, dried orange peel, fresh tobacco cedar and the silkiest texture with fine, grainy tannins and a hint of licorice on the finish."  Another approving taster felt this had "good intensity, good structure, good stuffing...very good!"
Sweet cream and vanillin notes are very seductive and my score sheet also notes a toasty element, dark fruits and a hint of sweet spices.  The sweet oak sits atop the fruit, with some aggressive tannins.  Youthful.  Wonderful wine.  Two-and-a-half stars.  Five to ten years aging potential.

"Lots of toasty oak, intriguing leafy notes with a chocolatey fruit quality." said the first person vocalizing their opinion.  Another felt this is "More like Barolo than Barbaresco, being stiffer than the rest."  Another person thought this wine rivaled the Gaja for the "best aromas and it had nice tannins and a spicy finish."  Another said "I just like smelling this!"  Another praised it for its "oak...lots of oak.  Sweet oak."  Curiously Bob ranked this 8th, as sort of a protest vote.  He was offended by the level of wood in this wine, feeling it is so "internationally-styled" that it's lost its identity as a Barbaresco.
There is plenty of vanillin in this sweetly-wooded wine, to be sure.  I also found some berry-like fruit and a cedar note.  Very showy on the nose.  There are some cherry-like flavors along with the wood on the palate.  The tannins are mildly aggressive, but very fine and it has a lengthy finish.  Two-and-a-half stars.  Eight to 12 years of aging potential.

CABERNETS OF THE WORLD TASTING October 27, 1999