On an otherwise quiet, sunny day along Broadway in Burlingame, our friend and neighbor, David Hinckle, came by in the name of espionage.

He'd been alerted earlier in the day that it was Ross Bruce's Birthday.

Ross, whose family has been rooted on Broadway since the Lincoln Administration, was observing his special day in a quiet and circumspect manner.

We were receiving a delivery of some wonderful Italian wine from our friend Amanzio Tamante, who'd parked in front of AVR Realty.
Ross was heading upstairs for a staff meeting. 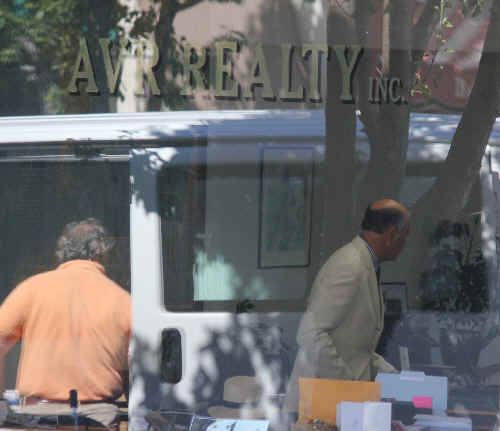 And so Ross was upstairs, conducting his staff meeting... 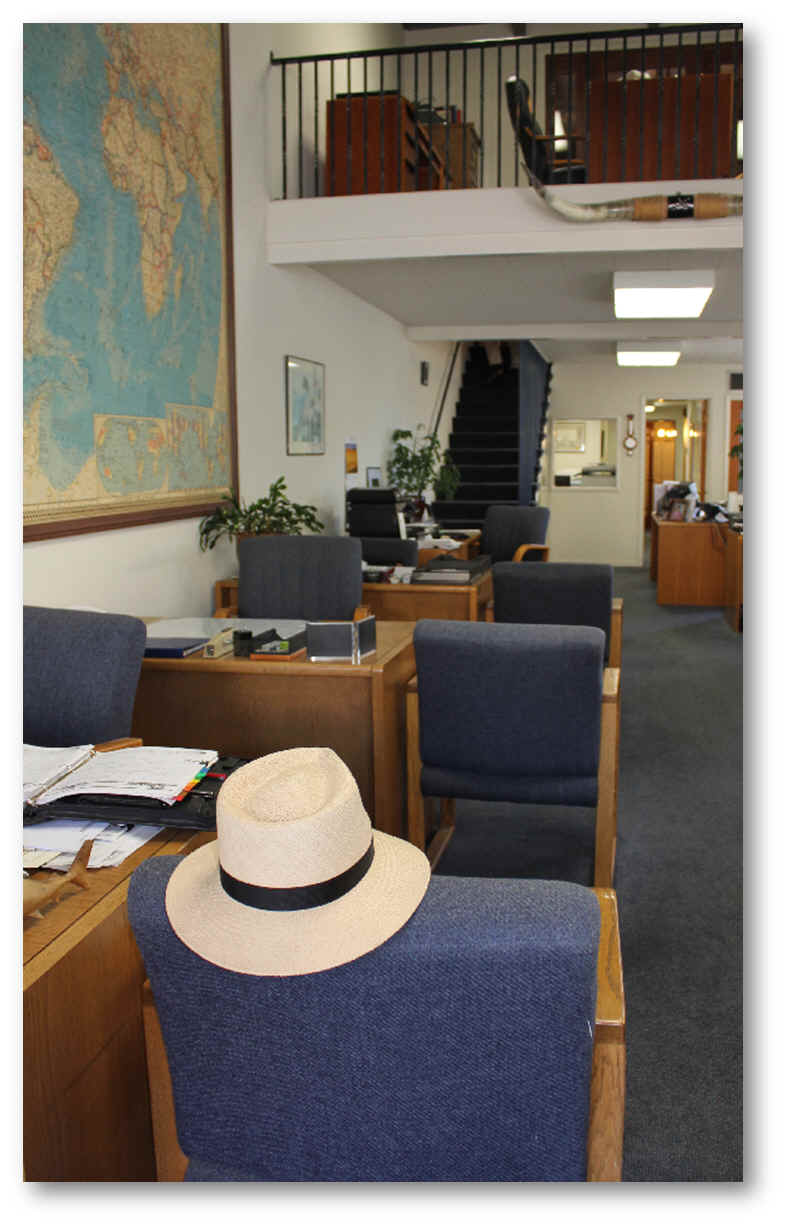 And then, upstairs we trekked, in the footsteps of a veritable celebrity!
(And we're not talking about Ross, who IS a local celebrity...) 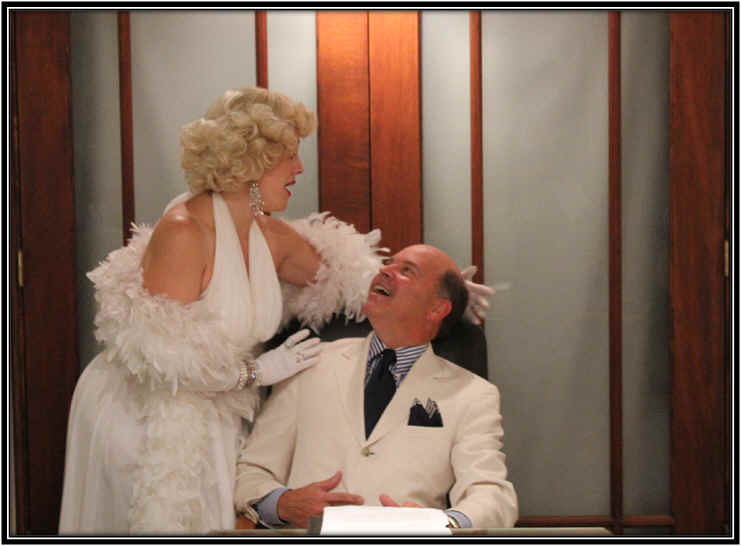 And there was Marilyn Monroe,
Singing "Happy Birthday" to The Birthday Boy.

And, boy was he shocked and surprised! 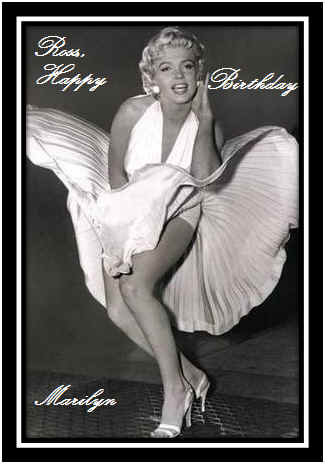 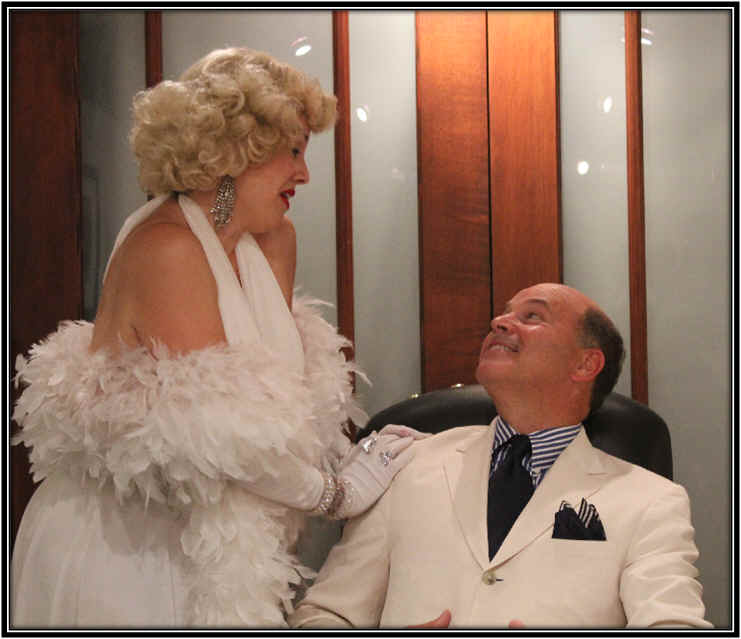 Marilyn even left Ross with a souvenir... 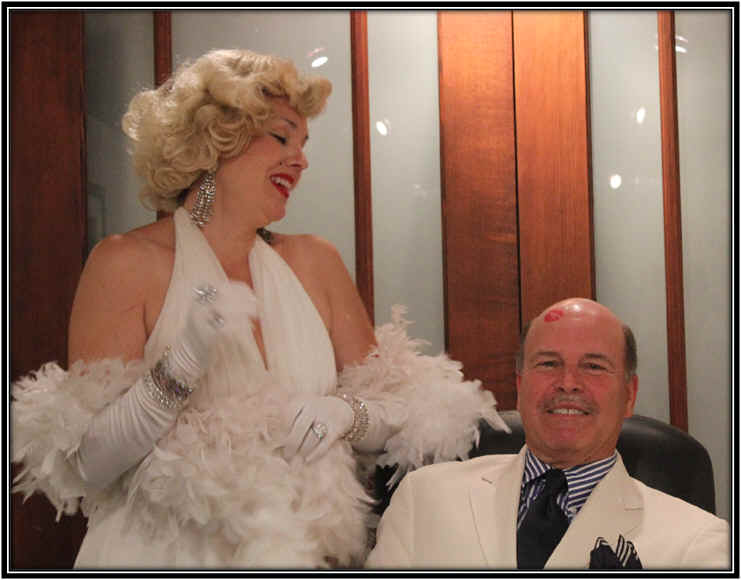 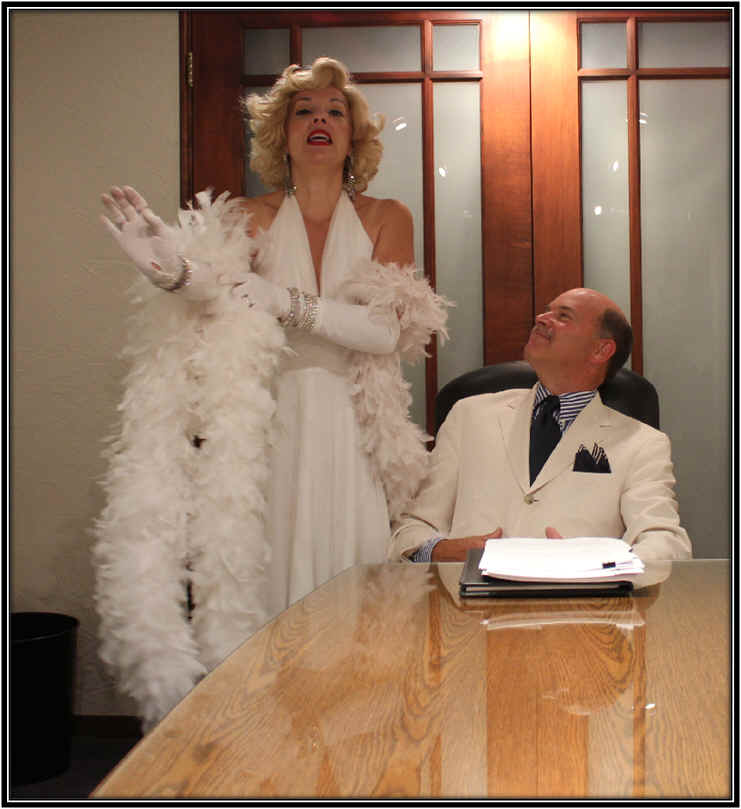 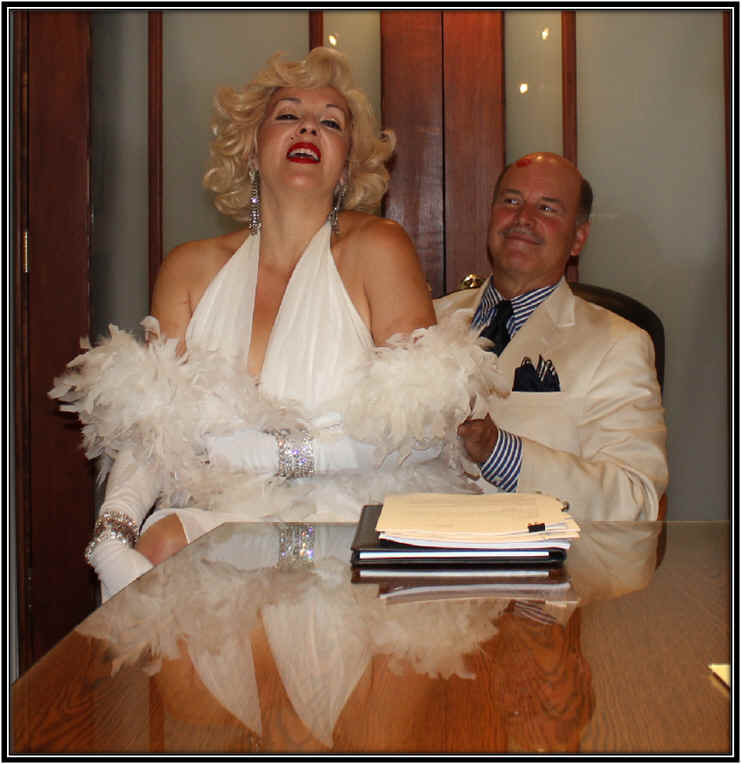 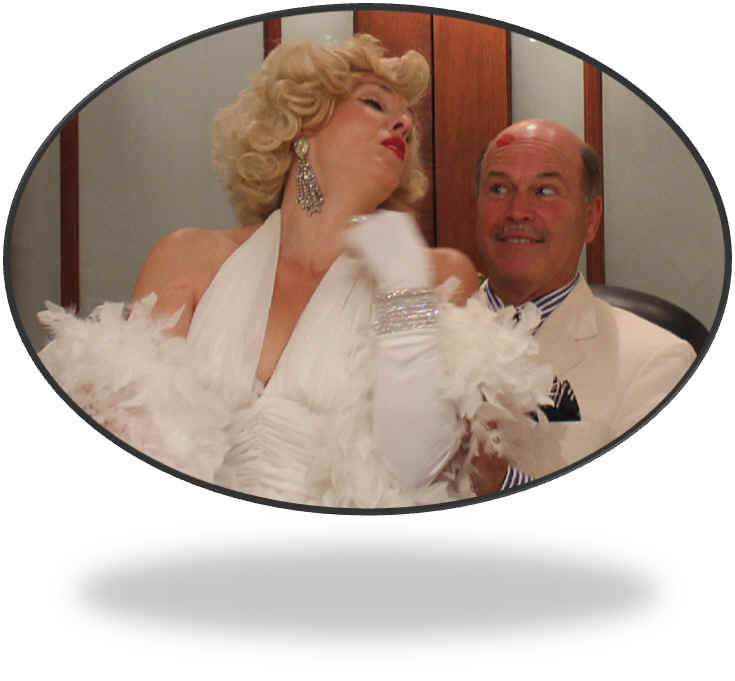 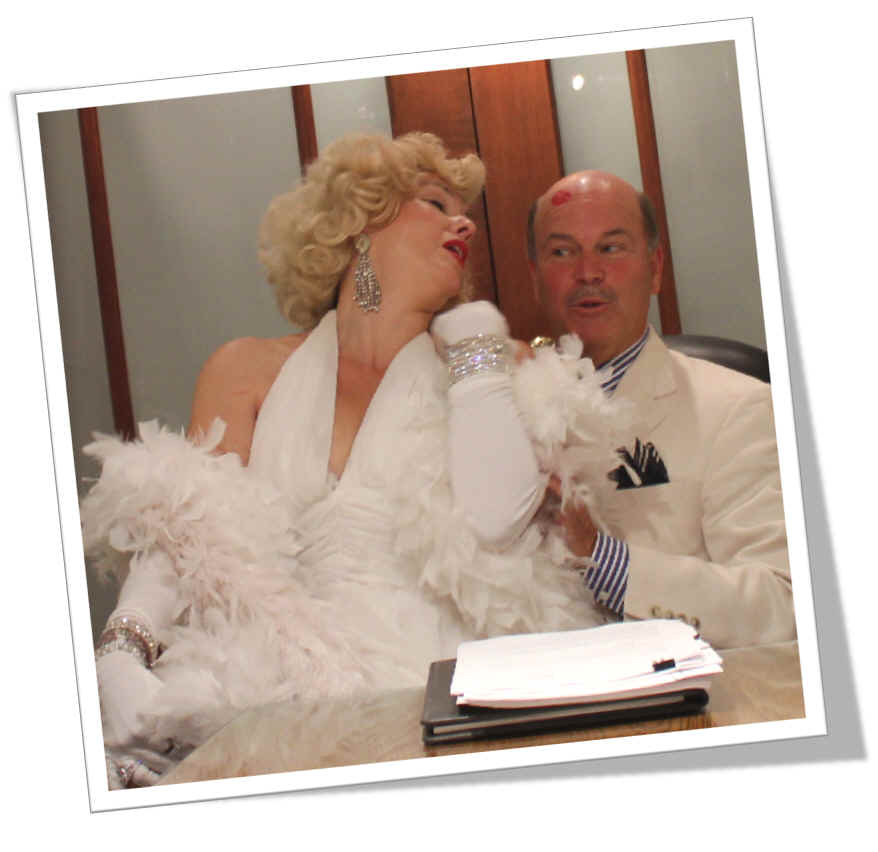 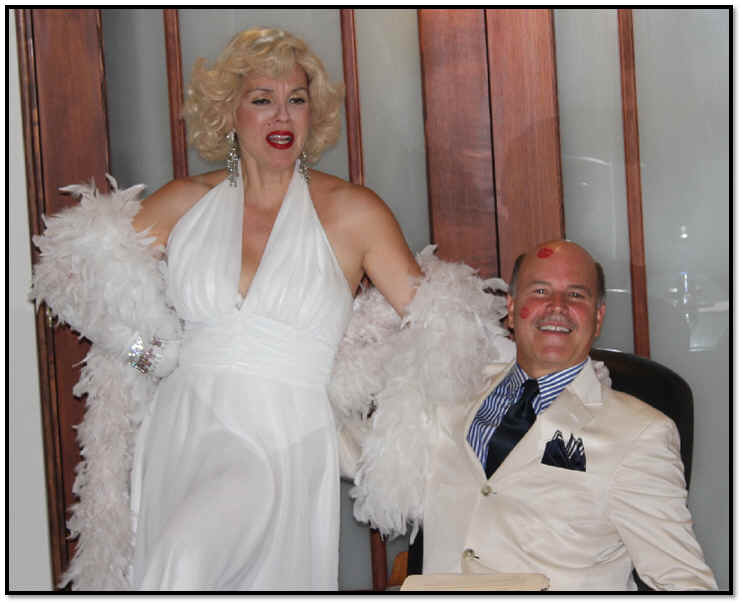 Apparently Marilyn was also delivering a personal message and she asked Ross to 'dig' it out for her...
He graciously declined, so Marilyn asked another Broadway celeb, David Hinckle (of Earthbeam) to see about unearthing this message... 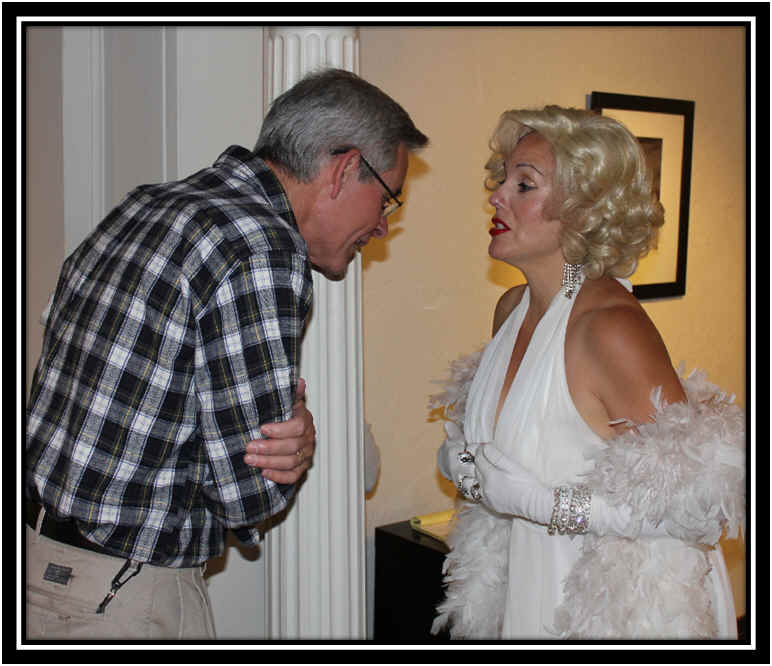 David had a look, but was unwilling to leave any fingerprints as evidence.

Ross, though, finally caved in... 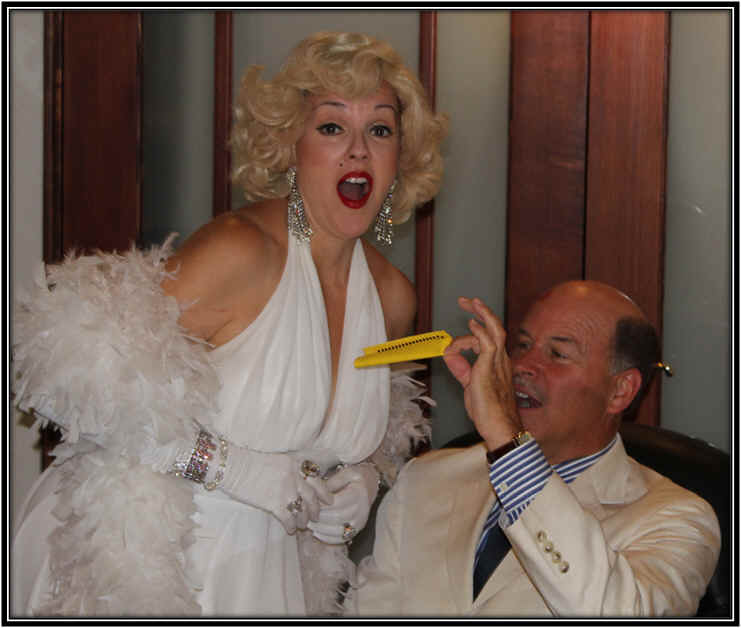 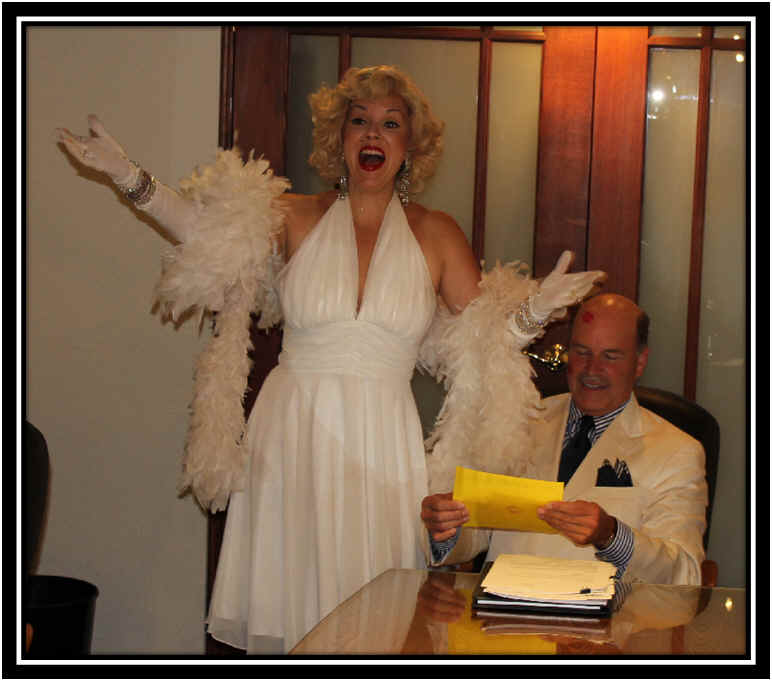 And there was a nice little message from Mrs. Ross Bruce, "Princess Diana" as she's known around town.
Diana is off in the Middle East, we understand, deployed by Uncle Sam on behalf of the U.S. military working with other medical personnel.

(Thank you for your service, Diana, on behalf of Burlingame, the State of California and the US of A!!!!) 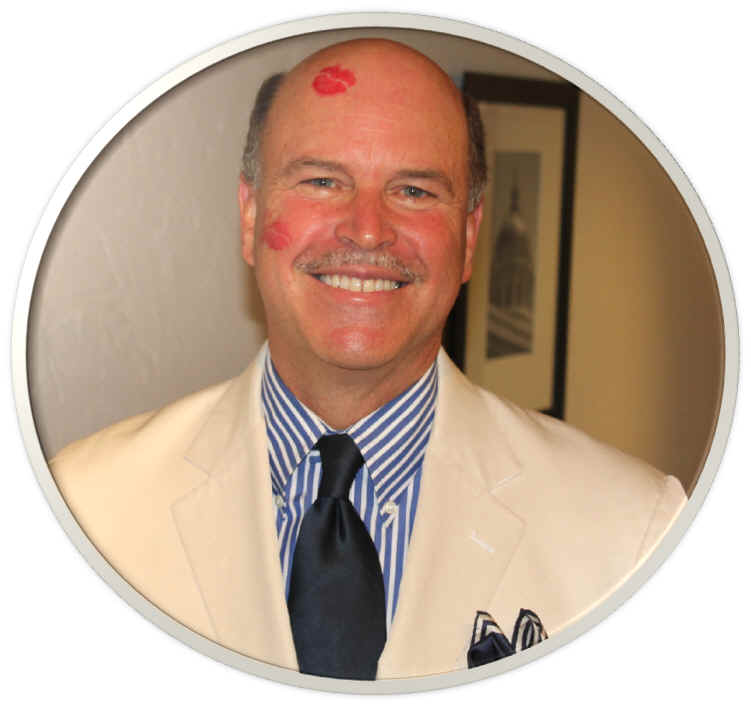 Later that afternoon, we noticed a bus stop along El Camino was decked out for this special day... 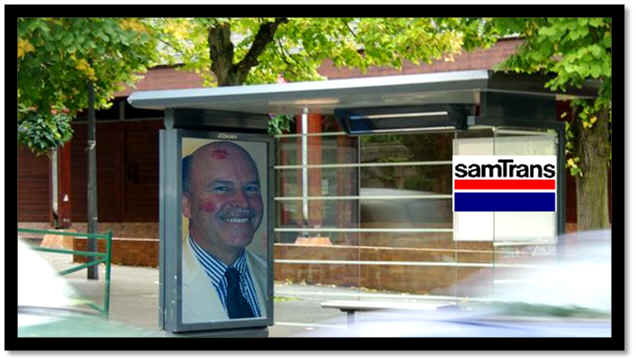 Over by Burlingame Avenue, the local fire department and city workers were unfurling a banner in honor of Ross's birthday. 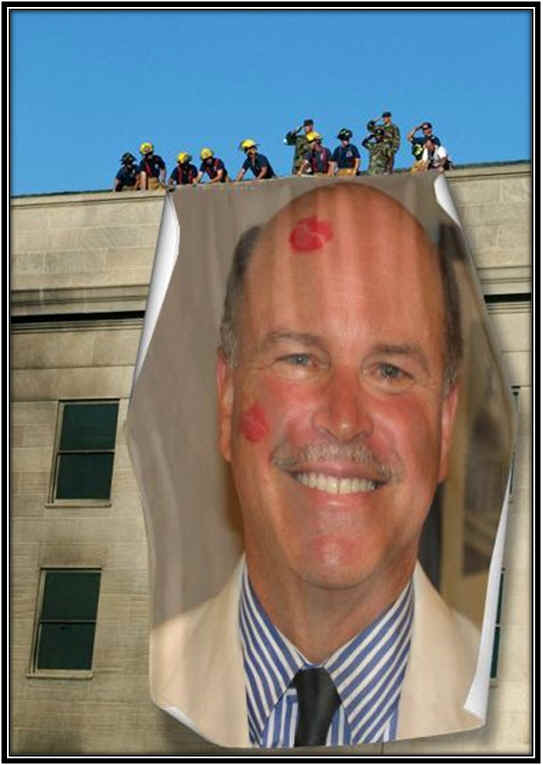 Over by the Safeway construction site we found another birthday sign being posted... 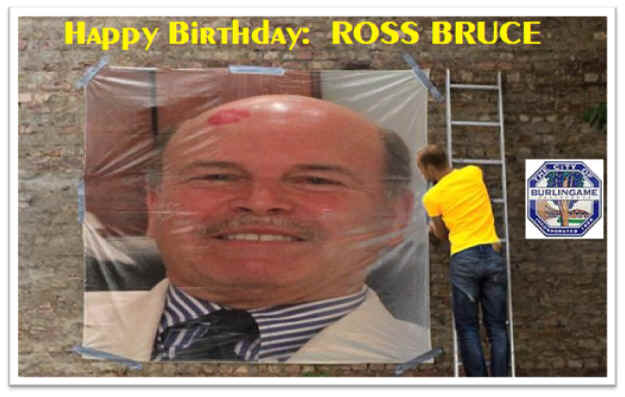 The local history museum had this masterpiece... 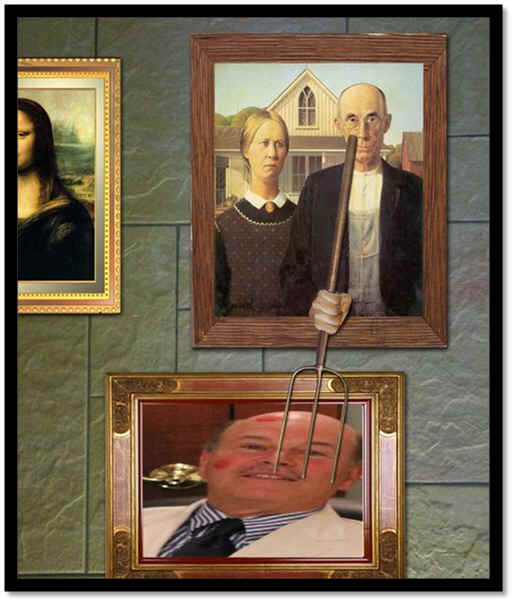 The birthday made the local news... 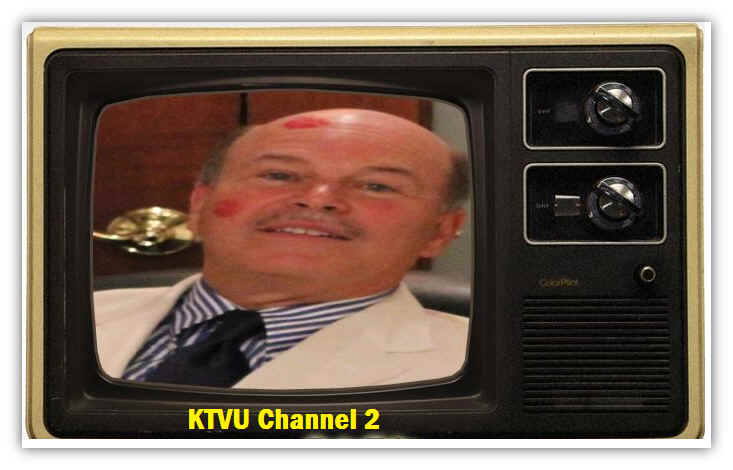 Later in the evening, President Obama spoke with Larry King as to why he did not declare this day a national holiday. 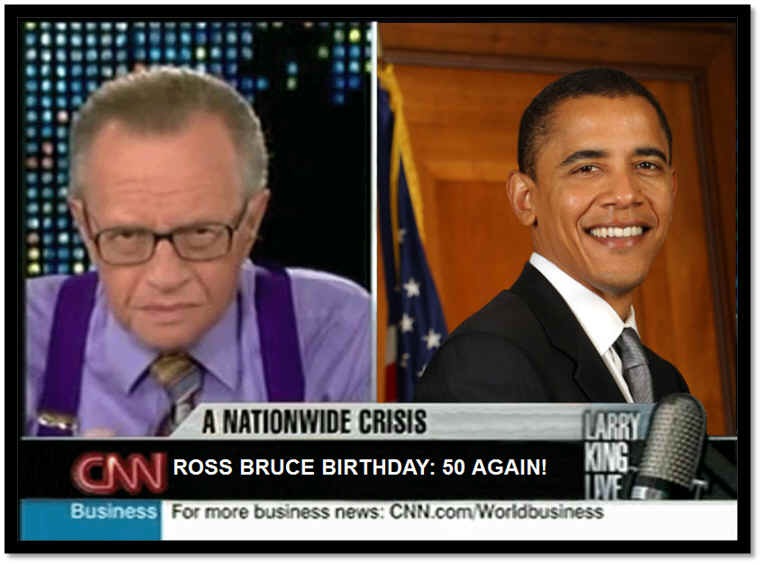 President Obama:  I can't tell you how many times Ross has celebrated his 50th.

Larry King:  Well, I can tell you and it's more than a handful.  He's celebrated his 50th almost as many times as I've been married.
Almost.

We were out at the Airport at the BART station and snapped this shot... 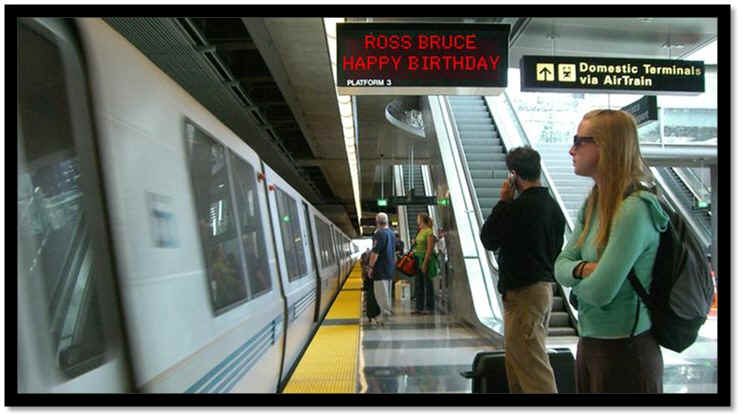 Along the Bayshore Freeway near San Mateo we found someone posted this billboard. 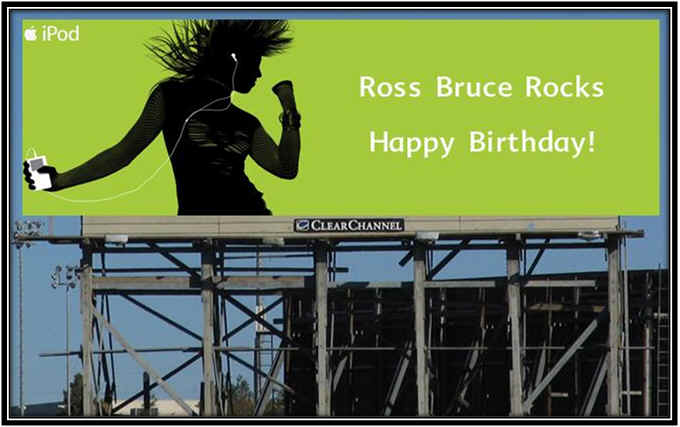 Notice of this special day was seen around town, too. 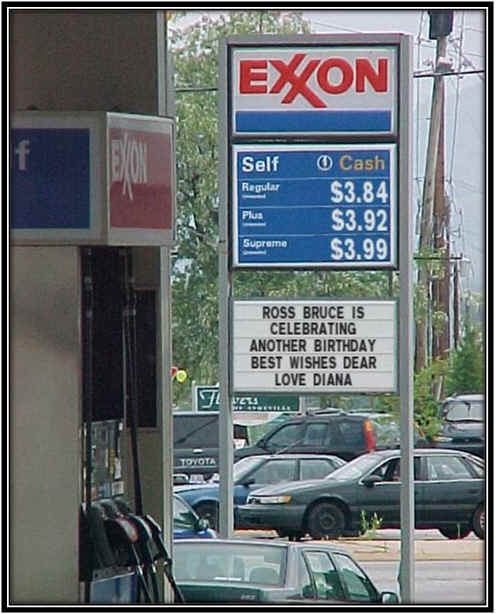 The Birthday WAS the talk of the town and all over the local cable channel. 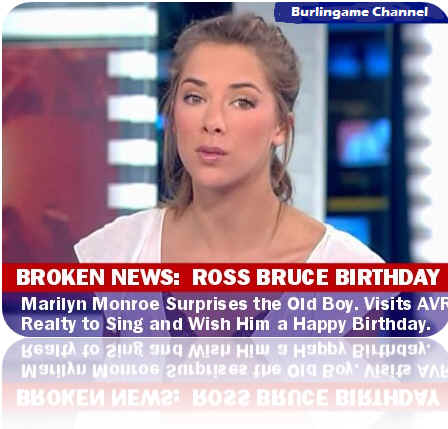 The Wheel of Fortune Game Show seemed to make note of this special event. 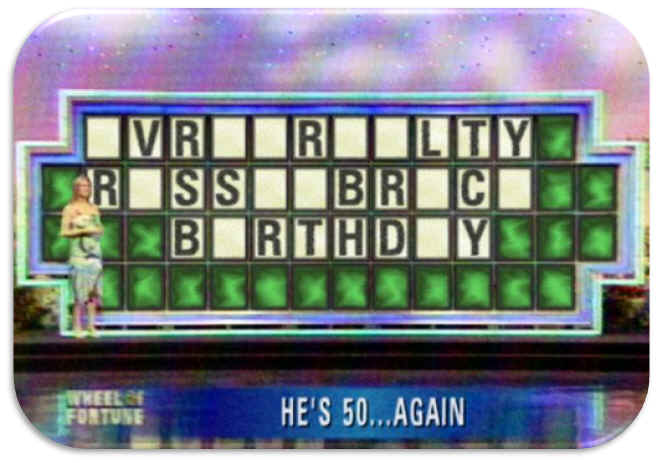 Can I buy a Vowel? 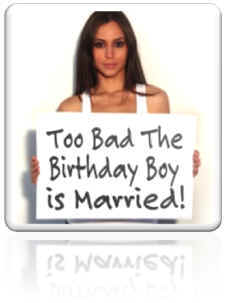 This lady was seen demonstrating in front of Il Piccolo Cafe.

Meanwhile, in LA, they changed the famous Hollywood Sign! 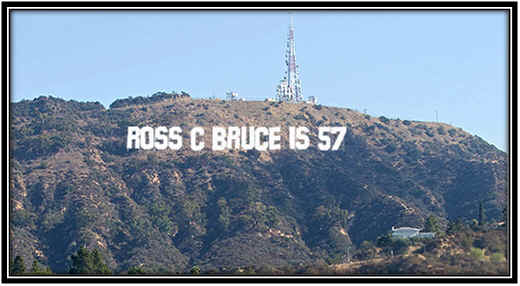 And the evening commute traffic was more sluggish than Ross was the day after celebrating his birthday, as rush hour drivers encountered this along the freeway into San Francisco: 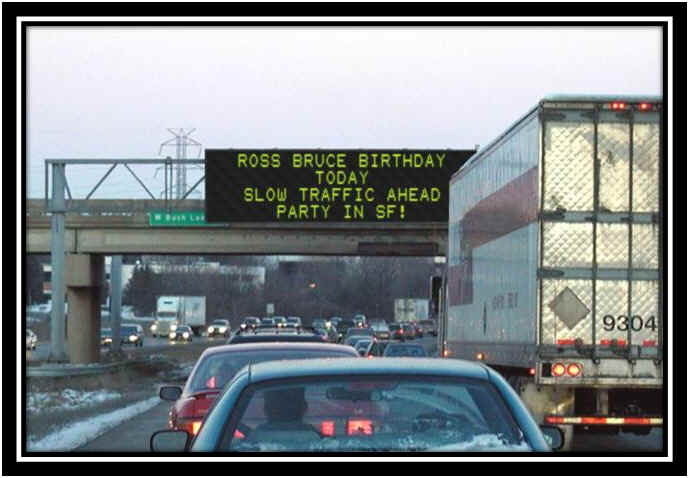 And so the Birthday was well known, far and wide.


We hope Ross will be celebrating future Birthdays with Mrs. Ross in town!


Best wishes from everyone in Burlingame, Ross...
...and some out-of-towners, too!