From the local newspaper...last day of the year 2021

County Residents are Ringing in the New Year

New Year’s celebrations are a go 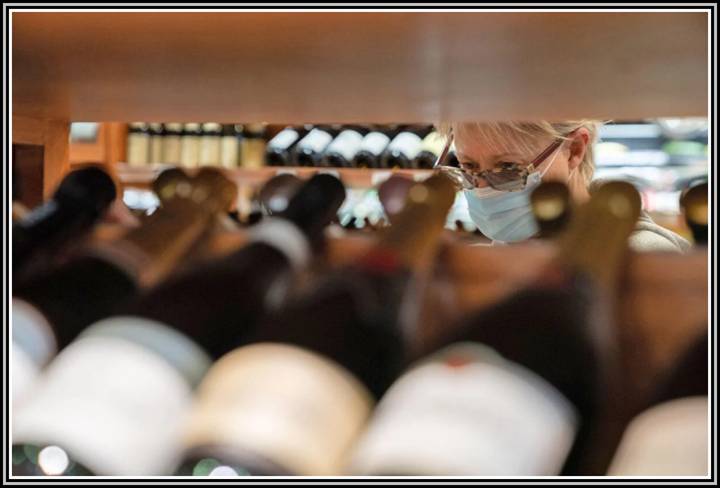 On the day before New Year's Eve, Sue Evans browses the wines offered at Draeger's Market in San Mateo.

With 2021 coming to a close, spirits appear to be higher than this time a year ago according to local wine and spirit merchants who say high alcohol sales can paint both positive and bleak pictures.

Despite another year of COVID-19 uncertainties and a new surge in cases caused by the far more contagious omicron variant, bottles of wine and spirits are flying off the shelves though not quite at pre-pandemic rates.

Oliver Kohns manages Draeger’s Market Wine, Spirits and Beer department and said his aisles see much more foot traffic around the holidays and this year is the same. What’s different is what people are purchasing.

Rather than fine wines, he said customers are opting for more “mundane” bottles they select while using online shopping services like Instacart. Like last year, most people seem to be grabbing just a bottle or two for more modest celebrations as uncertainty swells again.

“Omicron has thrown us for a loop because it came on so quickly,” Kohns said.

But even with the virus very much still present in communities, Quinton Jay, the owner of Bacchus Wine and Spirits in Millbrae, said enough has changed to make those interested in celebrating the coming of a new year comfortable doing so.

The county’s vaccination rate is near 95% for those ages 12 and older and about the same for seniors over the age of 65 who were at greatest risk of dying from the virus. And people have learned to adapt by adhering to safety measures like masking even when not mandated – San Mateo County’s mask mandate has been in place since July and neighboring jurisdictions just removed some exceptions for small businesses and gyms.

While it’s difficult to gauge whether someone is purchasing a bottle of brandy or merlot to ring in the new year or mourn the last, the merchants said their customers seem to be happier than they did last year.

Rather than purchase online or have bottles shipped to friends, Jay said he’s seen more customers strolling aisles for something special and carrying cases home for smaller gatherings.

Weisl said his shop has had more success selling larger bottles of sparkling wine than in 2020 and was pleased by the number of locals and out-of-towners who popped in to purchase one or more items from his eclectic selection of worldly wines and spirits.

At Draeger’s, Kohns said customers seem eager to celebrate too but noted spirit sales have buoyed business since skyrocketed at the start of the pandemic. Like a dip in Champagne sales, he suggested increased liquor sales could be a sign parties are few and far between.

“Hard liquor is still thriving in the industry now,” Kohns said. “There’s just no clear direction for people. They’re reacting more than they are planning. That’s just the time we’re in and hard liquor is a more effective drug.”

But what seemed to be bleak purchasing habits last year should now be understood as a shift in hobbies and drinking interest, Jay said. While buyers are shifting to spirits, especially brown liquors, to get their fix without being bogged down by liquids, he argued millennials are also turning to the bottles as craft cocktails and beers grow in popularity.

Spirits are also an easier sale than wine, Jay said, noting an everyday shopper is more likely to go for a $50 bottle of liquor with about 25 pours inside over a similarly priced bottle of wine which pours about four glasses.

That move toward spirits and any potential last minute party cancellations have benefited the merchants in some ways given that supply chain issues have been plaguing the wine industry. Corks, labels and bottles have all been difficult to come by and shipments that once took weeks to arrive are now taking months, the merchants said.

For those set on a specific producer, Kohns said he advised his customers to purchase well in advance and Weisl said his shop has managed to overcome supply issues by exposing customers to new and interesting products.

Regardless of what’s being purchased, people seem to have more hope for the year to come or are at least willing to take more risks to celebrate with loved ones, Jay said.

BACK TO OUR HOME PAGE