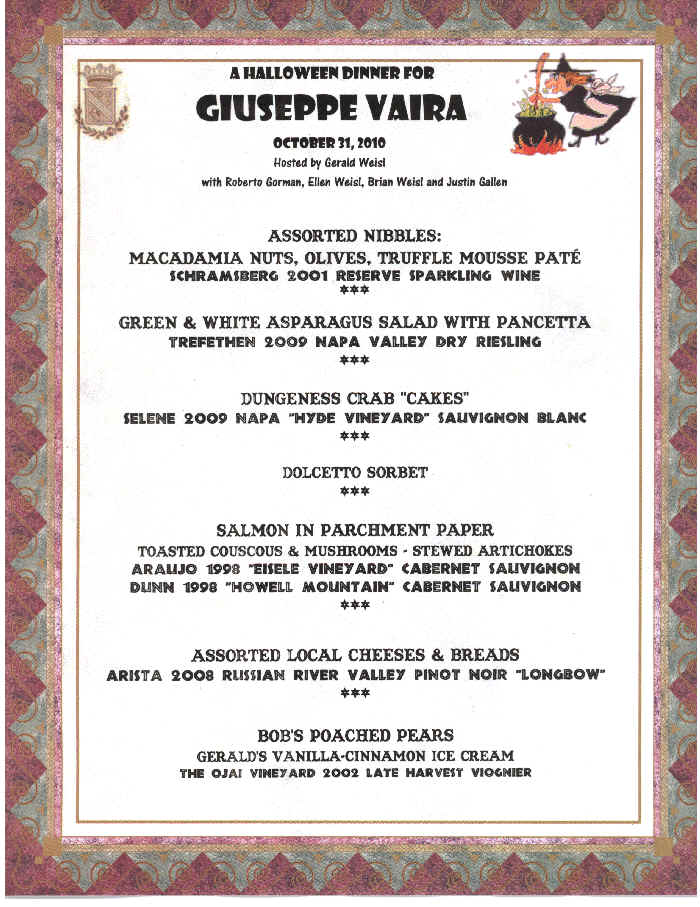 On the last Sunday in October, we had the pleasure of hosting our friend Giuseppe Vaira from the famous Barolo/Riesling/Pinot Noir/Barbera/Dolcetto/Moscato estate in Vergne close to the town of Barolo.

He flew in from Europe and in the late afternoon we began a small celebration of Giuseppe's arrival. 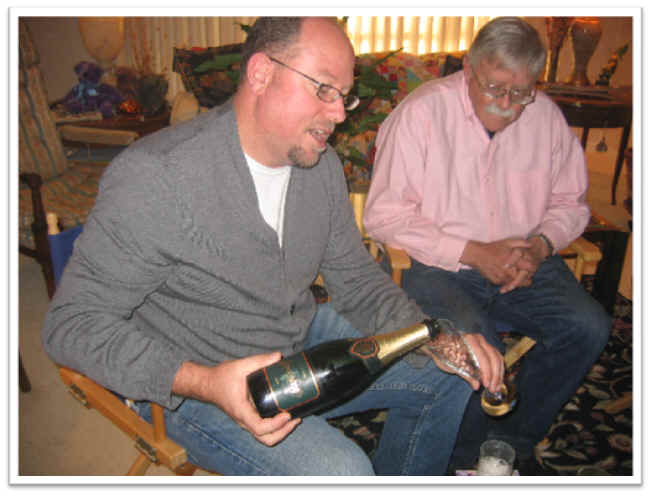 We popped the cork on a 2001 Schramsberg Reserve... 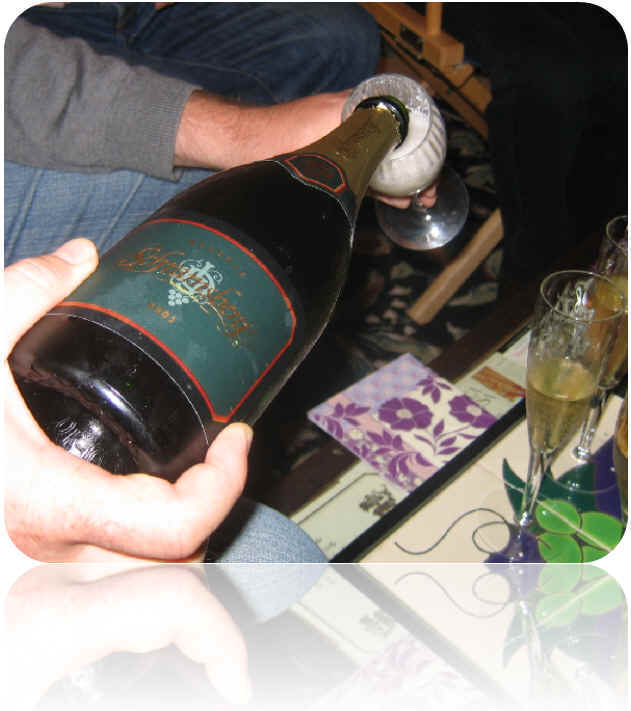 This was extremely elegant and quite dry...nicely toasty, too.  This was matured for 5+ years on the spent yeast. 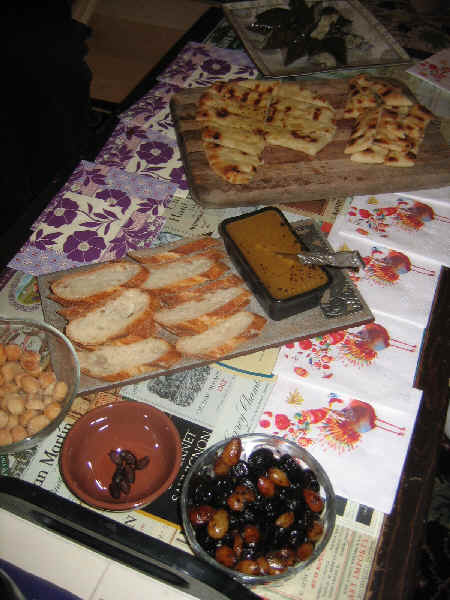 Then we sat down at the dinner table and opened a bottle of Trefethen's 2009 Napa Valley Dry Riesling to accompany a little salad. 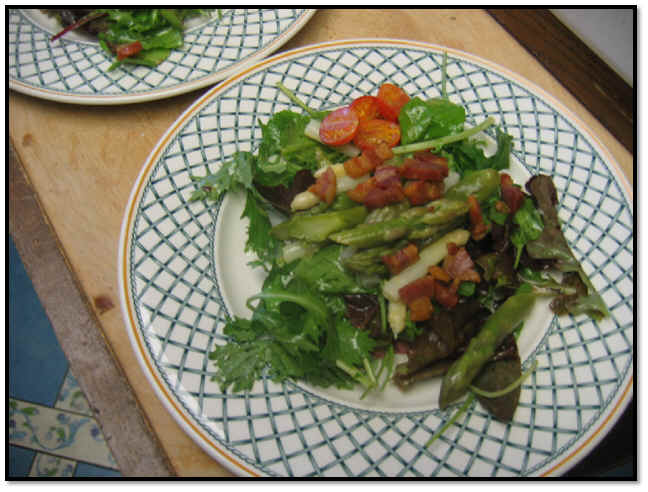 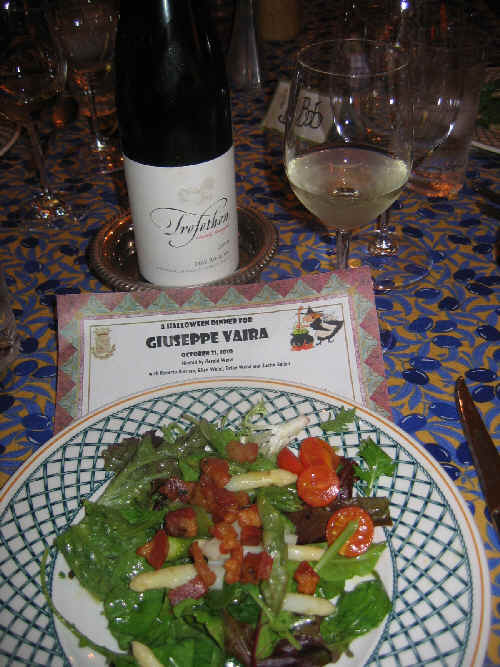 The salad had a lemony vinaigrette with a nice mustard character to it.  The salad featured assorted mixed greens and some white and green asparagus with some warmed pancetta on top.
Ellen brought some of her home-grown cherry tomatoes...very nice.

The next course was "crab cakes."  I browned some butter in a couple of frying pans and we mixed up the crab fixin's... 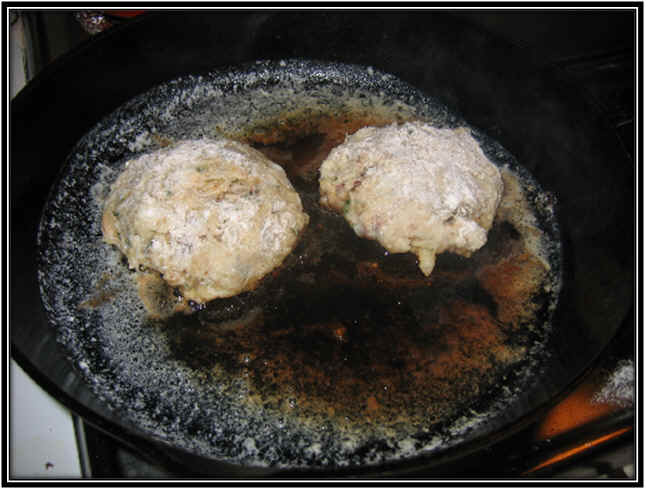 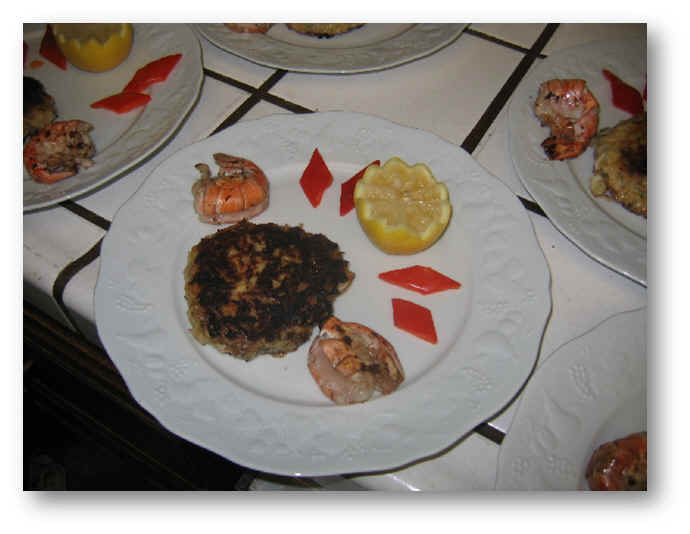 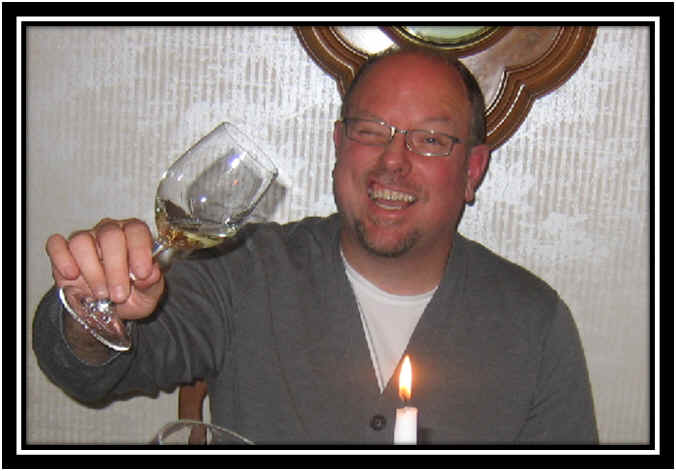 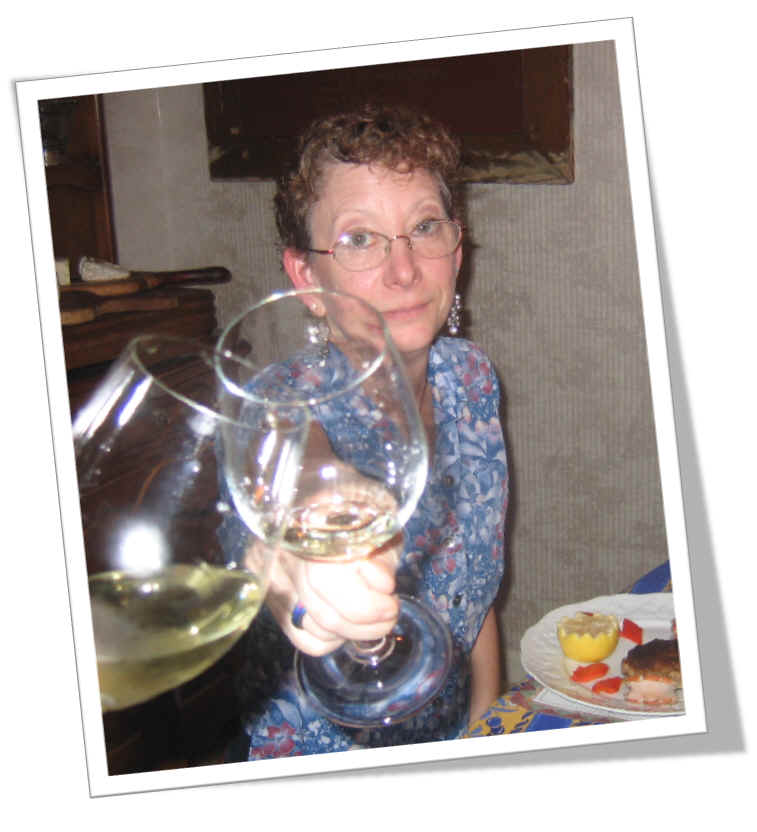 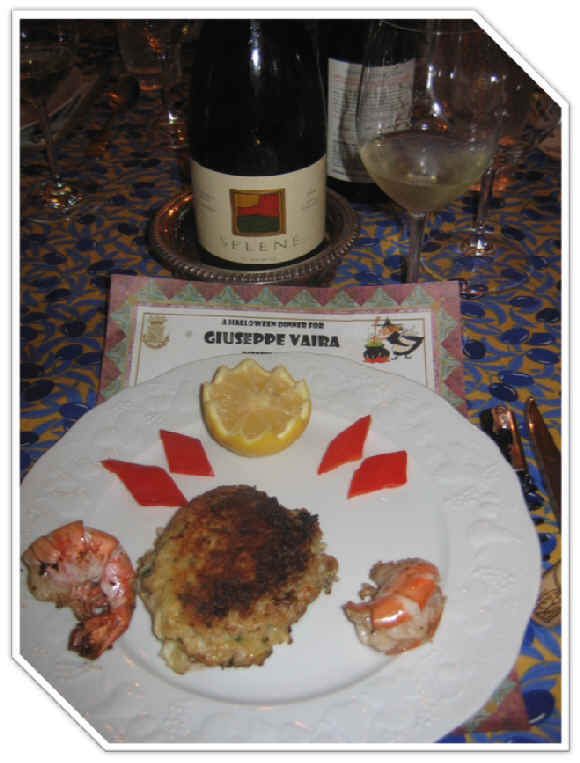 We paired this with a bottle of Selene's 2009 Hyde Vineyard Sauvignon Blanc from Napa's Carneros region.
This is a spectacular California Sauvignon and one of the best in the state.
It was quite dry and mildly citrusy with nice stony overstones. 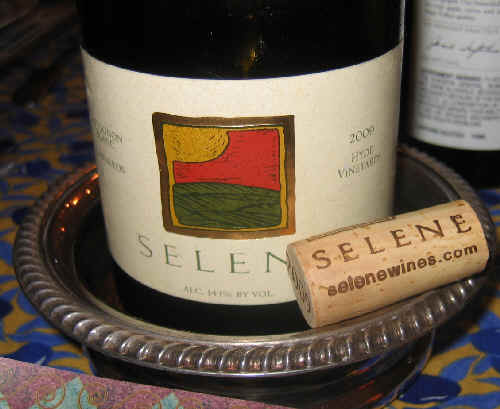 Giuseppe was amused by the palate cleanser, made from a lovely, fruity Dolcetto from one of his neighbors. 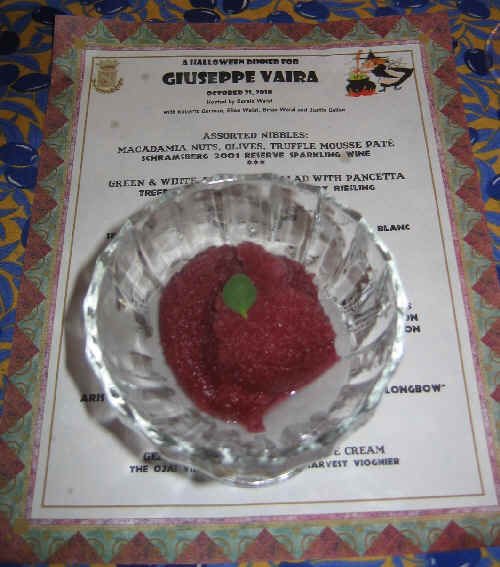 We then opened and decanted a couple of 1998 Napa Cabernets.
The "vintage chart" tells you 1998 is a poor vintage and consumers are urged to by-pass this sort of year.  We were curious to see how a couple of Cabernets had fared...were they worth cellaring?  Were they still alive?  Were they any good? 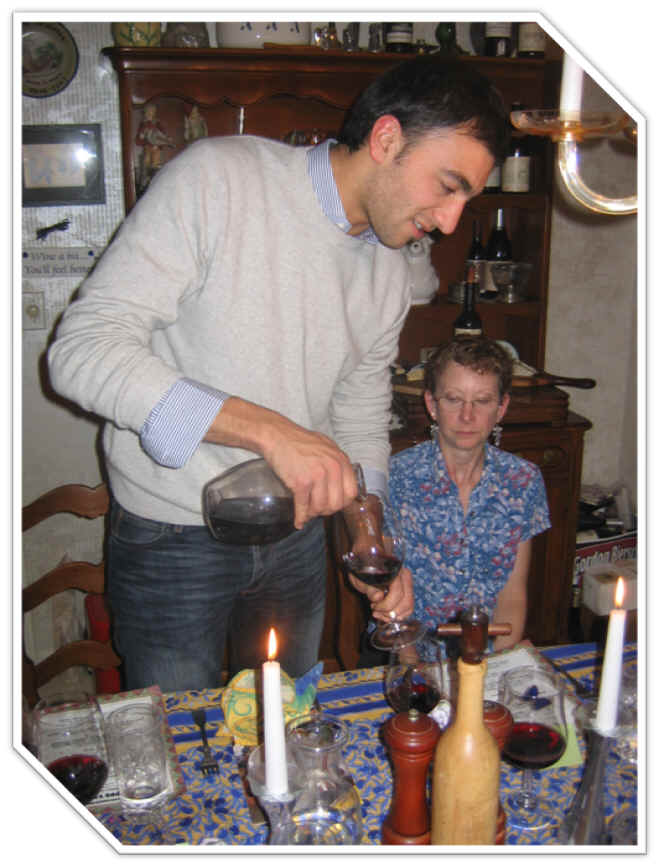 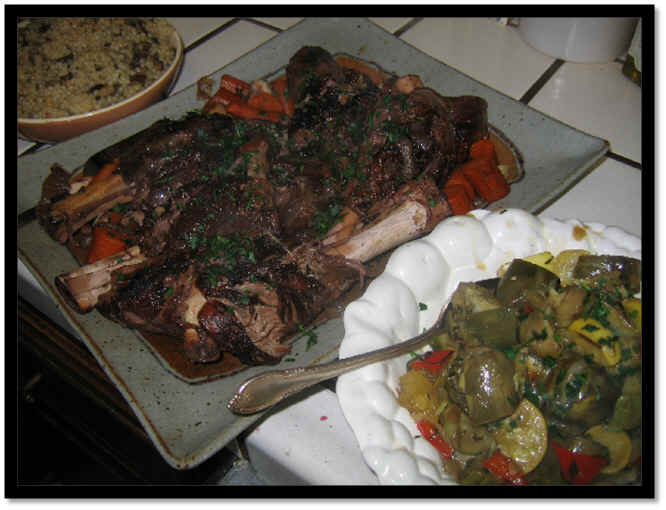 The 1998 Dunn "Howell Mountain" seemed okay at the start, but as it sat in the glass, this bottle's funky notes took over and Ellen said it was corked...
After a few minutes, we could see that, in fact, the corky element was increasingly apparent.
So...I looked in the cellar and found another bottle...a bit older. 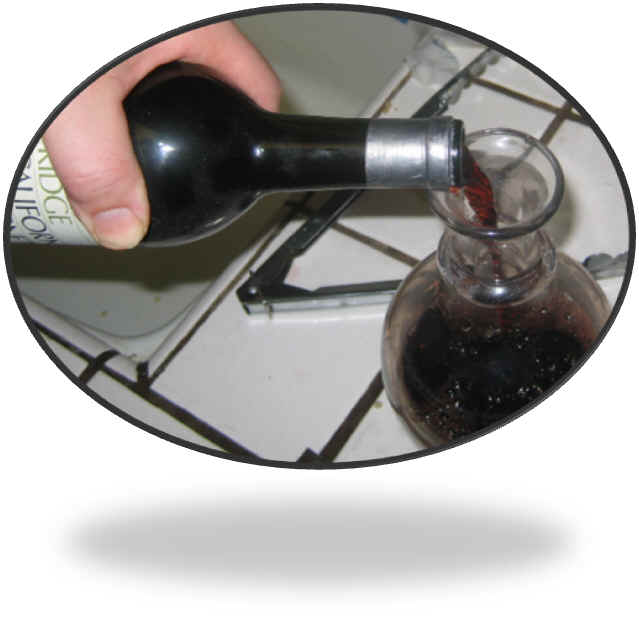 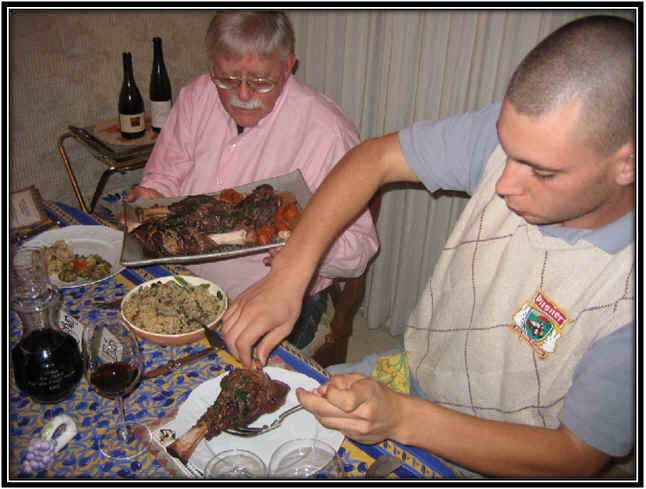 The vittles were passed around the table... 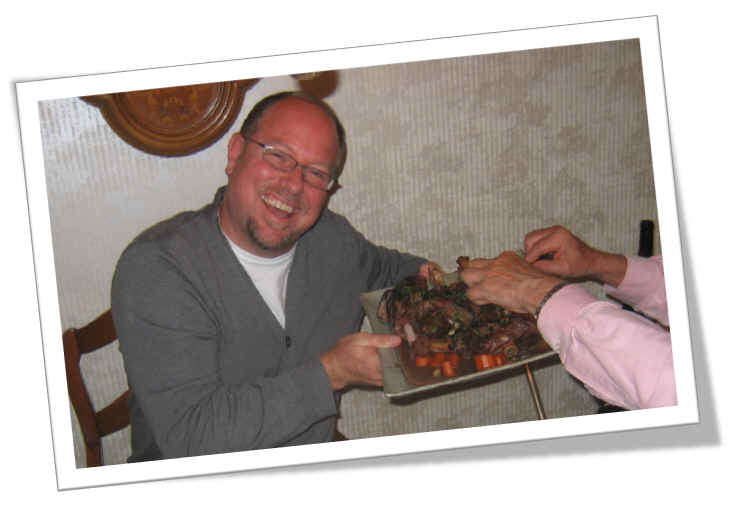 Giuseppe realized the Ridge was older than he! 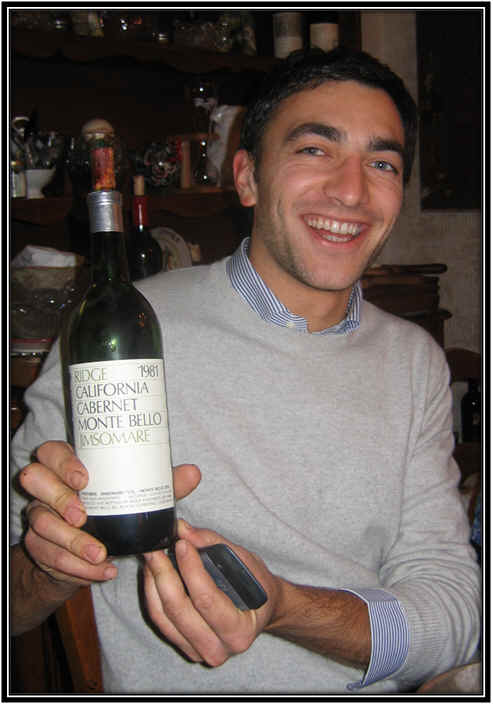 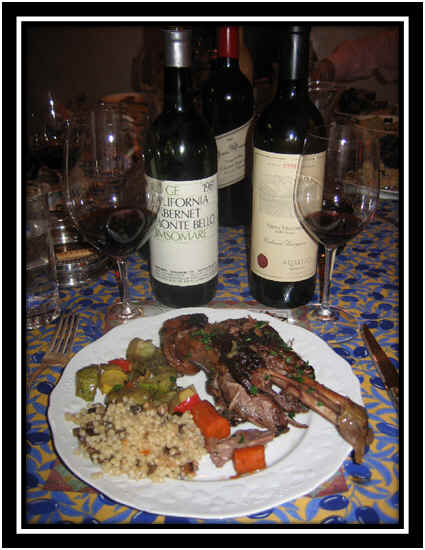 The Ridge showed some of the dill-like notes typical of wines aged in American oak.  It had plenty of acidity and a touch of tannin...a medium-bodied red, this was elegant and nicely mature.  It was also relatively low in alcohol.
And the bottle still had its ten-buck sale-price tag on it!

The other wine was a 1998 Araujo "Eisele Vineyard" Cabernet from an old site near Calistoga.  Ridge had made a spectacular wine from this vineyard in 1971 and it was later vinified by Conn Creek and Joseph Phelps.  After being acquired by the Araujo family, it appears exclusively under their label.
The 1998 vintage was declared by most critics as a "wash out" and there wasn't much praise for Cabernets from such a "difficult" vintage.
Well...anybody tasting this bottle would be hard-pressed to embrace the notion of it coming from a so-called "off" vintage.
This was full of dark fruit aromas and the oak was sweet and cedary/vanillin.  The wine was supple on the palate...remarkably fine! 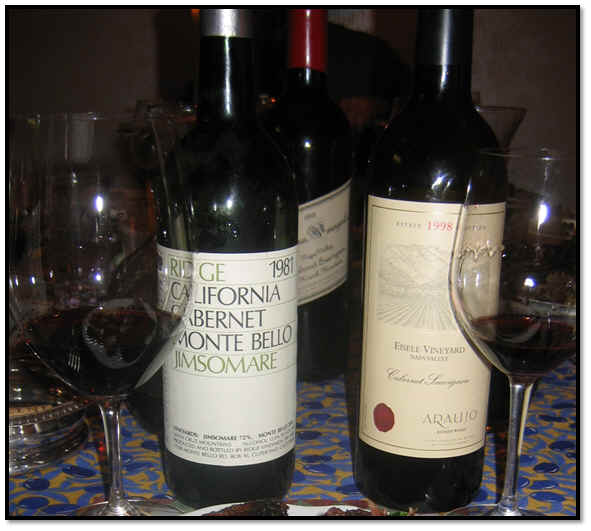 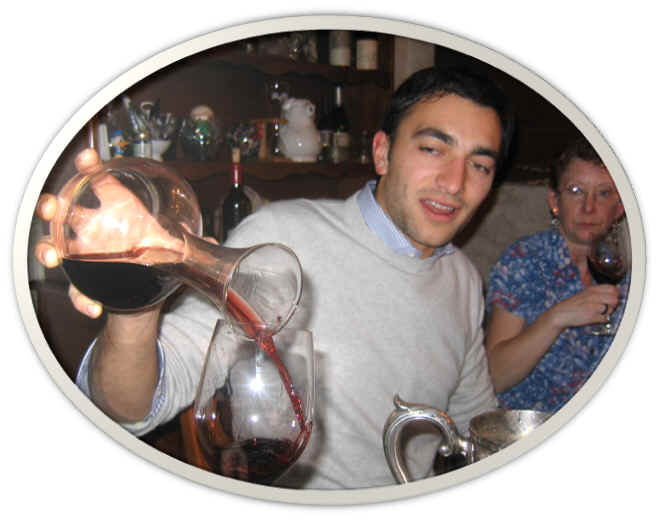 At one point during the dinner conversation, Justin mentioned wines from his birth year, the lovely 1968 vintage.
Giuseppe, it turns out, made his way into the world shortly before the Nebbiolo grapes were picked in 1985.
And...I had selected a bottle of wine to pair with the various (mostly) local cheeses... 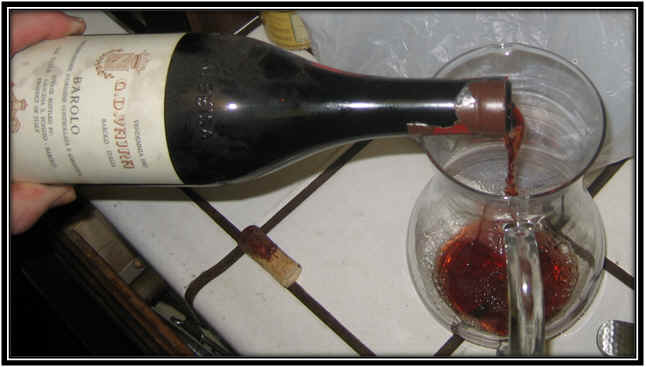 What luck!
A 1985 Vajra Barolo, imported years ago by Crosse & Blackwell!

I brought this out in the decanter and did not announce its identity...

We sniffed and tasted and some guessed it to be an old Cabernet, possibly from Howell Mountain.
Finally I brought out the bottle and Giuseppe was amazed.  The cork, he noted, was clearly put in the bottle by using a hand-operated device. 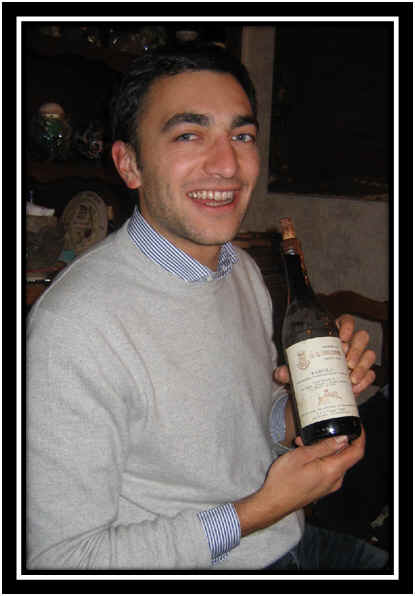 At this point the paparazzi descended and Giuseppe and his birth year bottle were the subjects of numerous photos. 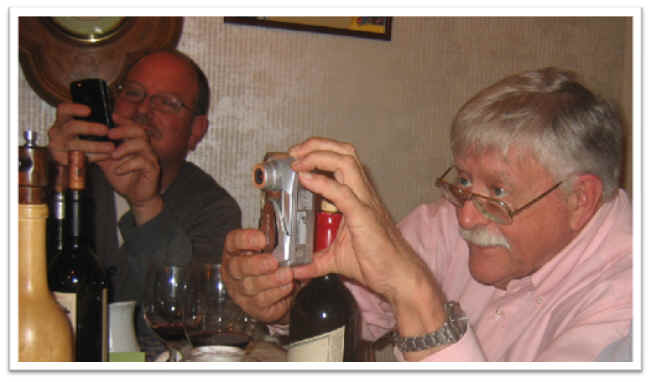 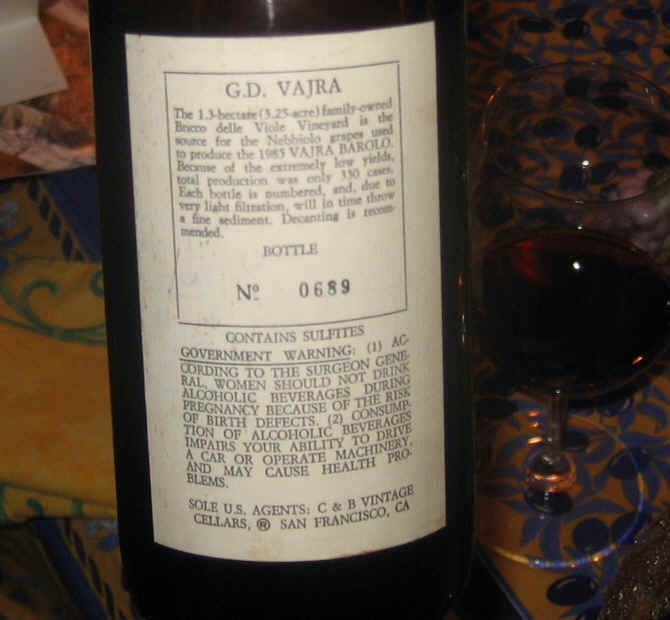 We then served some cheeses, mostly locally-made.... 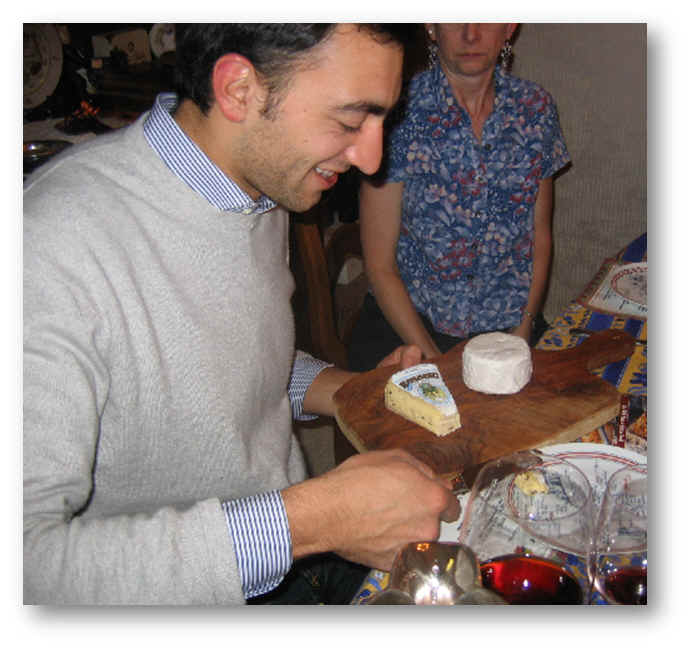 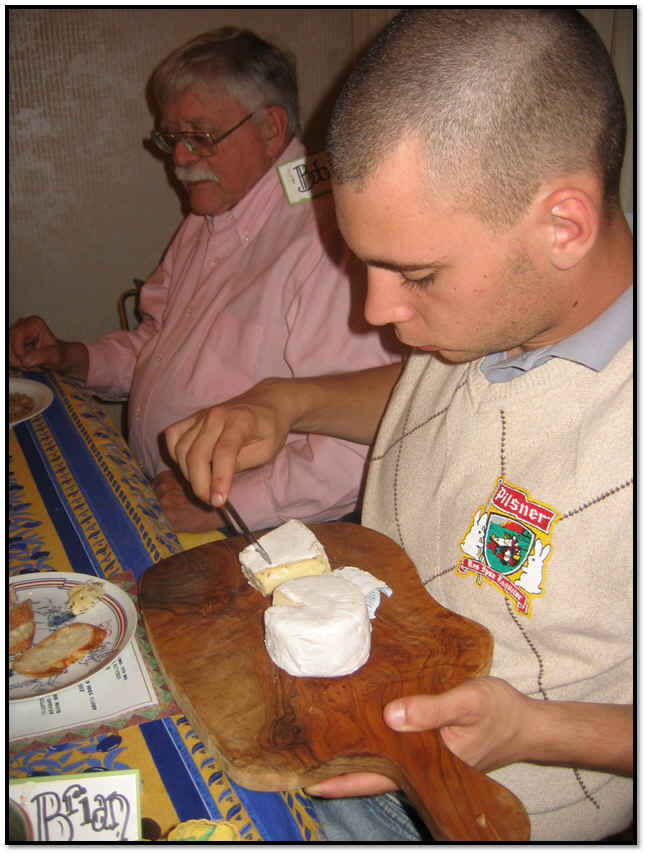 And we enjoyed the berryish, spicy Pinot Noir from the Arista winery in Sonoma's Russian River Valley.  This was deliciously fruity, showing sweet cherry notes and some spice and wood tones. 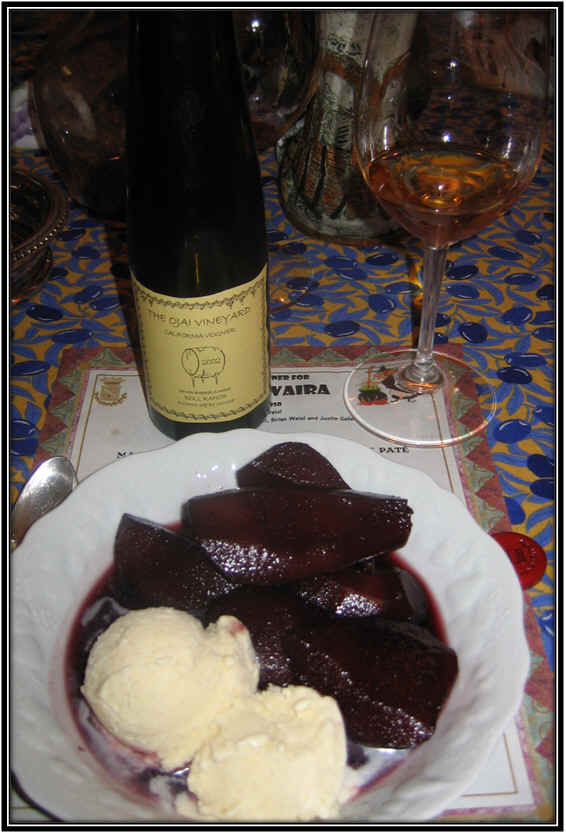 Bob brought pears poached in red wine and I made a Cinnamon-Vanilla Gelato.

And, having been awake for more than 24 hours, Giuseppe was ready to head for his hotel and hit the sack.

This was a lovely evening...thanks to all who participated.

BACK TO THE FIRST FOOD, WINE & FRIENDS PAGE