Many American wine drinkers are shocked to learn Chablis is made in France!
It is a pity that American vintners pirated the name of the area after Prohibition and the word "Chablis" became synonymous with "white wine."

Chablis vintners, though, have worked to restore the good name of the area and to distance their wines with the anonymous wines coming from California's Central Valley which also bear the name Chablis.

The wines used to routinely be described as displaying notes of "gunflint" and minerally, smoky tones.
The soils consist of Jurassic marl or Kimmeridge clay or Portland stone (also known as limestone).  The Kimmeridge terroir gets its name from a site in Great Britain near Dorset.  Chablis has been devastated by frosts from time to time.  Vineyards were severely impacted some 50 years ago by major late frosts and vineyard owners have worked to implement frost protection systems.

As the region is generally rather cool, especially at night, the acidity of the Chardonnay grown in Chablis tends to be rather crisp and pronounced.  Most consumers of California Chardonnays are often surprised, sometimes unpleasantly so, by the fact that most are not only tangy, but bone dry, too.

You'll find "Petit Chablis" from time to time...this comes from vineyards on the plateaus of the region.  We've periodically found some of these to be quite good.  The law allows a higher yield in these vineyards.

"Simple" Chablis covers something close to 4400 hectares of land, with about two-thirds being carpeted with vines.  This means more vineyards might be planted in the future.  Yields are also high, producers being able to have 60 hectoliters per hectare.

There are about 79 climats producing Premier Cru Chablis.  This proved too confusing for consumers, so they've consolidated the number of cru sites to a more reasonable number.  The best known are Monte de Tonnerre, Fourchaume, Vaillons, Cte de Lchet, Mont de Milieu, Fort and Butteaux.  When young these display quiet notes of acacia, hints of iodine and green apple.  If you can wait for these to blossom, good ones develop more toasty, almost hazelnut-like notes.  Most producers will tell you to give their premier cru wines about 5 years in the bottle for the wines to blossom.

The Grand Cru sites are located on a hill just outside of the town of Chablis.

If you drive out to see the hill with the grand cru sites, you can drive up the road adjacent to Les Clos.  At the top of the hill there is a parking area and numerous picnic tables in the woods.
There's a great vista of the vineyards of Chablis overlooking the grand cru of Les Clos.

A stone "map" of Chablis...from the top of the hill you can see all the great vineyards!

We visited this site on a winter road trip in early 2006...looks like a great place for a picnic!

We enjoyed a nice lunch at a bistro in Chablis...the photos below will give you an idea of the local cuisine.

I'm not sure what Grandma was drinking, but I know it was not "Pink Chablis"!

The server must have been having a tough day as she was more tart than the Chablis wines!
This situation might have been aggravated all the more when the bottle of wine we ordered was rejected for being corked.
The local vintner we were dining with had also sniffed the first pour and agreed it was "bouchonn" or smelling of a wet, damp cellar.
The server immediately grabbed the glass and took a sniff for herself, slamming the bottle down onto the table.
She informed her co-worker that we'd just rejected the wine...we wondered if the restaurant has had numerous bottles of this producer's wines sent back, or what.
Anyway, the fellow who ordered the salad depicted above enjoyed this plate immensely, as it was festooned with lots of local cheese.

A couple of us ordered the guinea hen, a sort of fricassee with cabbage, potatoes, carrots and a few bits of pork.

Pochouse a la Chablisienne, a seafood "stew," poached in Chablis.

The diner who'd opted for the pig's feet appetizer did not finish all the plate and he was certain this was pointed out to the chef.
Having ordered the rabbit, he was dismayed at finding the chunk of meat to be mostly bone as it was the front part of the animal and not the more meaty hind-quarters!

We simply ordered a coffee and departed.

Back to the main White Burgundy page.
We stock some lovely Chablis wines, by the way. 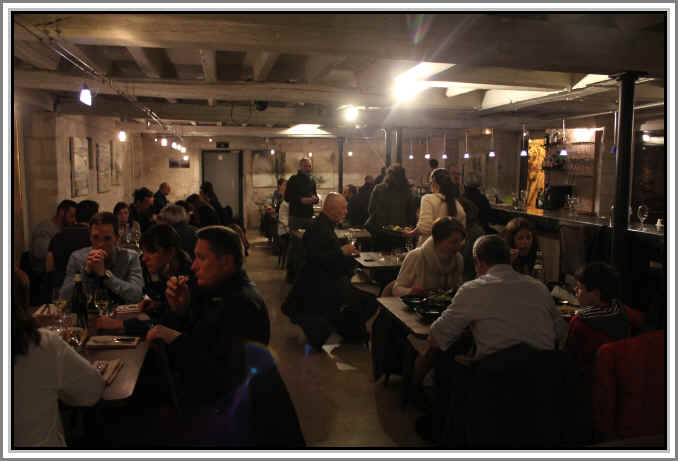 It's a smallish place in a building owned, apparently, by the Chablis producer "Laroche."
The place also has a hotel, the Hotel du Vieux Moulin.
It's best to make a reservation, as seating is limited and it's a hot ticket.

The wine list is outstanding and features a good selection of the top domaines.

We chose their Chef's Tasting Menu which was about 53 Euros in March of 2016.

They brought an Amuse Bouche to start... 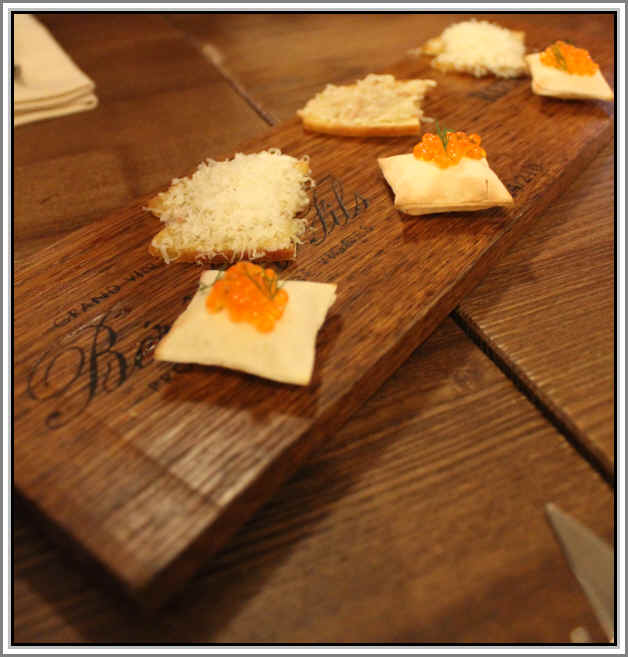 We all ordered the Tasting Menu and you can see the culinary artistry of this place... 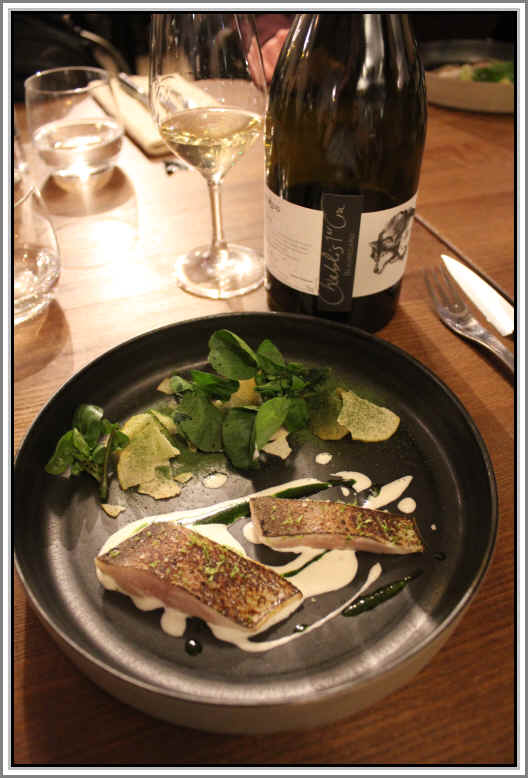 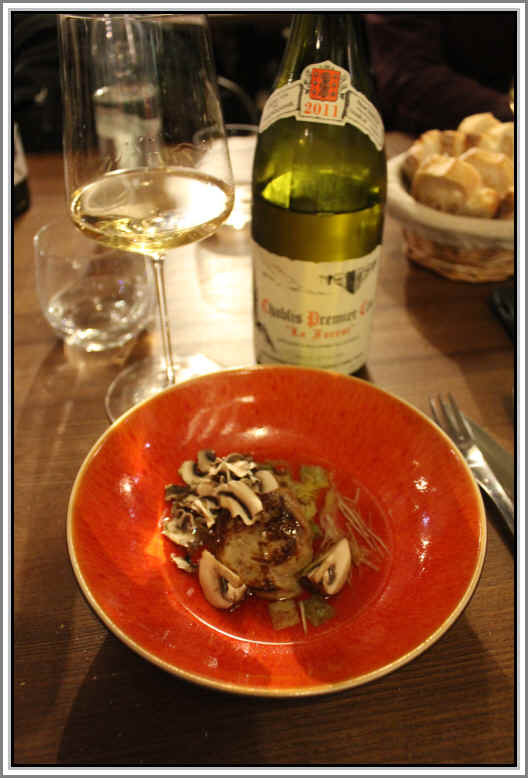 Foie gras Poęlé with Champignons de Paris and Consommé de Volaille
Oh my, this too was exceptional!!! 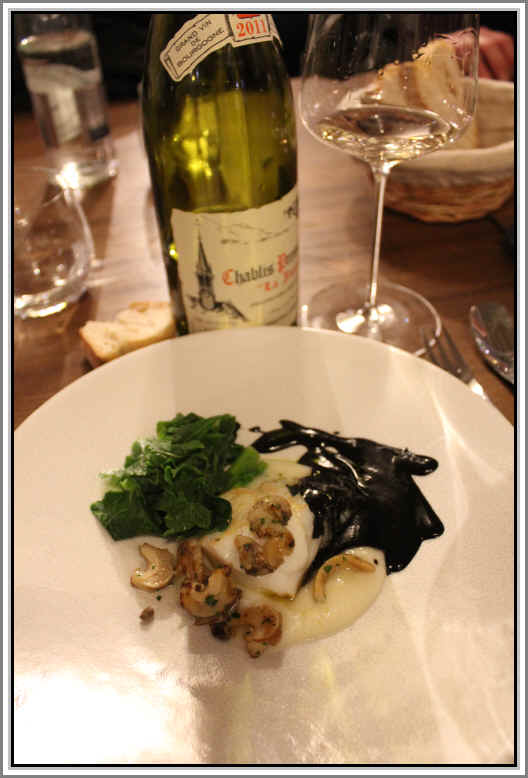 Cabillaud, Bulots and  Encre de Seiche
which is
Cod, some sort of snail or whelk with squid ink...
Another exceptional dish! 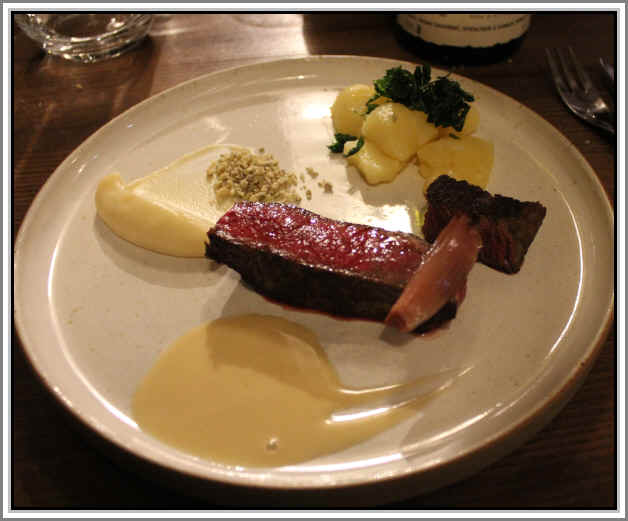 We asked the wine guru for a suggestion for a nice red (to follow the two Chablis wines we enjoyed) and he picked an Irancy Rouge, a Pinot Noir from a somewhat obscure region close to Chablis.
"Irancy will be the next big thing" he claimed.
We will see. 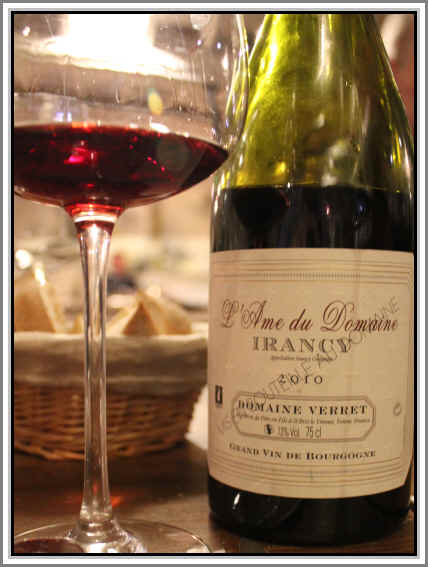 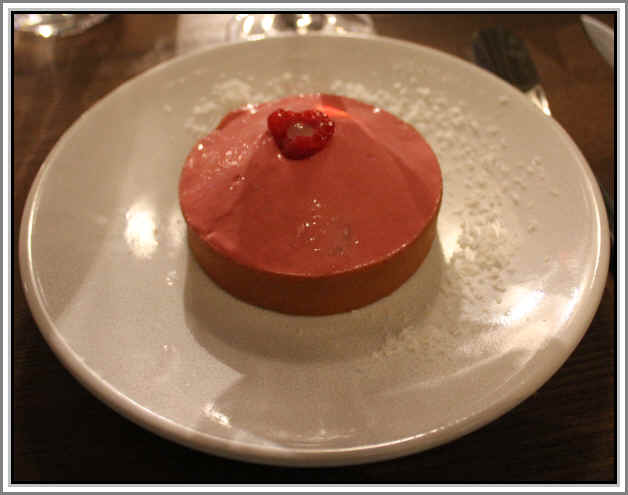 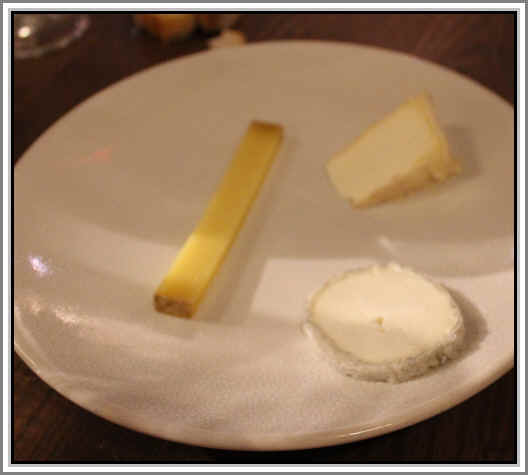 A few tastes for the cheese eaters at the table. 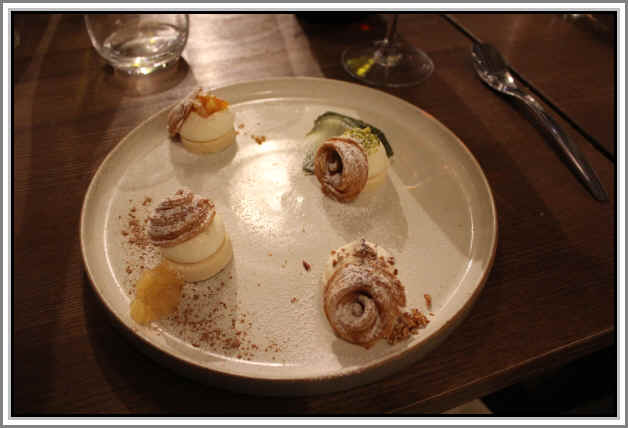 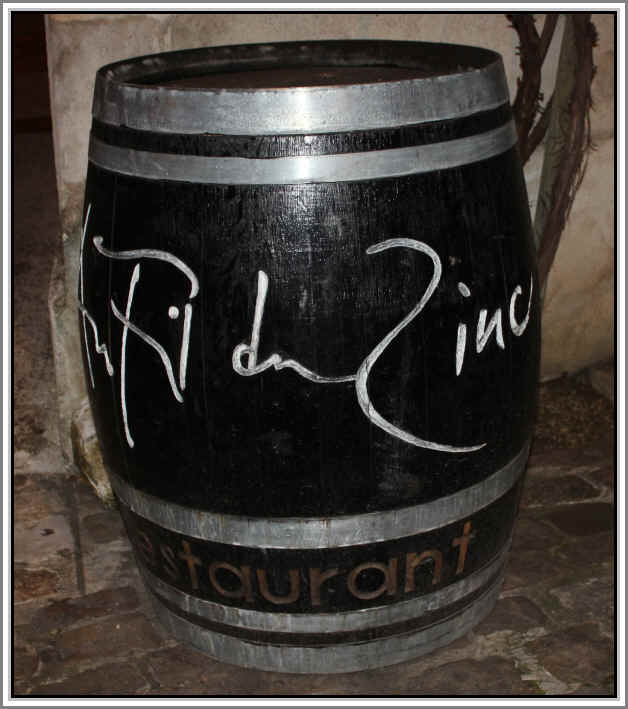 This was a wonderful meal...a "must" if you are in Chablis.