WUBBY WONDERLAND
Mister Wubby is the son of Ellen Weisl.
He is an 19 year-old fellow, who is attending CSM.  His name is BRIAN.
His favorite subjects are math and P.E.

His favorite foods are Macaroni & Cheese, Nachos and the ribs at Armadillo Willies....  Burger King ain't bad, either.

His favorite person in the whole wide world is:  MOM.

One of his best local pals is Jameil.  Jarred and Ryan, too.

His favorite Uncle is Uncle Gerald.  Of course, Gerald is Mister Wubby's only Uncle.  But he's pretty good anyway.

Some of his very favorite people in the whole wide world were his Grandma Ceil and Grandpa François.  Grandma and Grandpa looked after Mister Wubby many an afternoon when he's done with school.  Grandpa sometimes prepared a special meal for the three of them, while Mom is busy working.
Mister Wubby liked going to the movies with Grandpa, especially because of the popcorn.
Brian was sometimes privileged to have a "Sleep Over" at Grandma and Grandpa's.   This is always a fun event.
Brian has even had "Sleep Overs" at Uncle's!  He is especially amused by Uncle's snoring, which sounds like someone clear-cutting a northern California forest!
Brian plays on the computer and does homework there.
He was learning to play chess and Grandpa is teaching him a thing or two about the strategy.  Watch out Boris and Bobby Fischer!


Brian also has many fans around the world.
Dr. Erin is a 22 year old Pittsburgh resident who wants to be a vegetarian when she grows up.  She likes animals.  But not on her dinner plate.  Anyway, she's just graduated from college in San Francisco with her big sis, Lizard..   Dr. Erin also has become an expert in baby-sitting and in making lattes and espresso coffees.
Her sister is the famous "Lizard."  She  wrapped  up her college etch-a-ma-kation in San Francisco in 2006.
Their Mom (Anne) is a famous nurse in Pittsburgh.  She now has the duties of cleaning Oscar's cage and letting Snickers and Daisy out to do their business.

Eva Block (see photo at right) is another fan of the Wubster.  She lives in Rodgau in Germany.  This is not far from Frankfurt and Brian says he would like to visit.  He knows that in Eva's part of the world, "hot dogs" are in abundant supply.  And he has heard that Hamburgers come from Hamburg.  And Frankfurters come from Frankfurt.
Eva is a smart cookie and is now attending college.  She plays the piano and can do magic tricks.  Plus, now she's able to drive a car.  She lives next door to her Uncle Norbert and Aunt Gaby.


Caterina Cordero wishes to meet Brian.  So does her cousin Sebastiano.  Caterina lives in Castiglione Falletto.  Sebastiano is in Genoa.  These kids are from Piemonte in Italia and they know all about two of Brian's favorite foods:  Pizza and Gelato.
Caterina is a smart little lady.  She is the third child of Manuela and Mario.   Francesco and Lorenzo ain't bad, either.  Sebastiano's dad Leo is an artist.   So is his Mom, Betta.  But she does her art with grapes, while Leo works with paint.
Another friend of Signor Wubby arrived in January 2000, Signor Michele, son of Luca and Elena Currado.  This kid doesn't speak much Italian, yet has great lung power, so perhaps he will be a tenor for the local opera company.

Elena Bonifer (in photo on left) lives with her parents in Rodgau, Germany.  Elena studies English and is another smart cookie.  She can sing and dance and has learned how to twirl plates on a small stick.  She is hoping her Mom, Anette, overcomes her fear of visiting the US and takes her to California for a visit.  She's a year older than Brian.  Her father, Claus, is a big wine fan and he drags Elena and Anette to places like Tuscany, Piemonte and Champagne.

Brian also has a little "cousin," Alanna, the daughter of Amy and Whisper FitzJensen.  Alanna is a really cute little squirt, being four years old.  She wants Brian to teach her how to ride a bicycle.
Alanna is now a big sister to little "Dane." Alanna missed seeing Brian the last time she came over to Uncle Gerald's to wreck the place.
*** 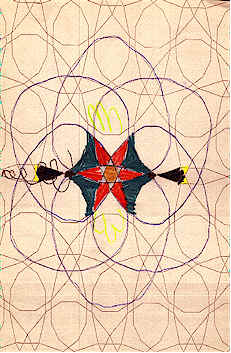 This is some of Brian's art work from years ago.  He will do more, so check back periodically to see his latest masterpieces and creations!


BRIAN'S PAGE 2
SOME FRIENDS OF BRIAN

Brian was on his school's 7th Grade basketball team in 2005.

He's just a wee bit taller than most of the other players!

Brian likes playing the "hot corner," third base on the diamond.

His Uncle took him to the local aviation museum where he got to "fly" a helicopter.

He is a big fan of good food.
His Uncle took him to an Asian noodle shop recently.

He liked the homemade Kielbasa. 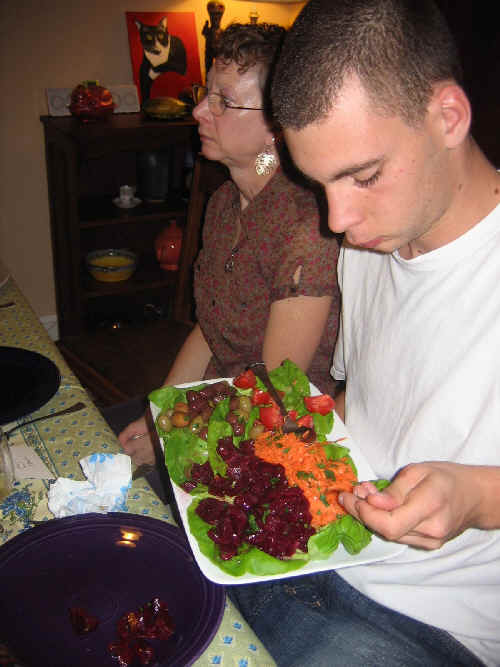