One of the newer members of the group assembled a very interesting set of wines featuring Syrah-based reds from various producers. 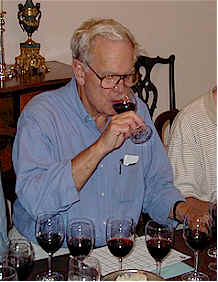 We found far finer quality today than we'd experienced in these wines many years ago.  New vineyards featuring finer grape varieties and serious quality-oriented winemakers have gone a long way towards this improvement. 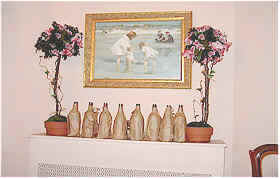 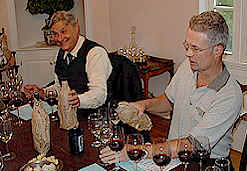 7th Place:  GILBERT ALQUIER et FILS "Faugres"
Mild berry notes and a touch of spice...This is a rather standard quality wine, seemingly made of Grenache and Carignane.  Moderately tannic.  Nothing wrong with this wine, but not terribly exciting, either.

6th Place:  DOMAINE de PUECH CHAUD "Coteaux du Languedoc"  -Langlade-
I suppose this is more costly because it's the work of a famous winemaker from another part of France.  There are some elements which are interesting and enjoyable, but you might not be appreciative of the smoky, burnt, smells-like-they-had-a-fire fragrances.  One taster thought it has the acrid burn of SO2, while I overheard someone else describe this as "vegetal."  The leathery, smoky, meaty features are interesting and bold, but so is the price. 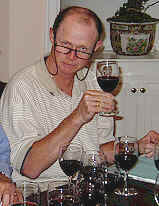 5th Place:  MAS CHAMPART "Coteaux du Languedoc"
I found the famous "garrigue"-like notes to the fragrance of this wine (and it's in the other wine from the same producer).  Hints of rosemary on the nose...nice flavors with a touch of spice.  Fairly elegant and drinkable now.

4th Place:  MAS CHAMPART "St. Chinian"
This wine had a bit more spice than the basic Languedoc bottling.  The wine shows rosemary and lavender spice notes to its fragrance, with a touch of anise on the palate, as well.  There's a fair bit of structure here, so you'd want to serve it with something substantial, food-wise.

3rd Place:  CHTEAU LA ROQUE "Pic Saint-Loup"
I marked this down because of the "stewed fruit" or raspberry jam notes...a matter of personal taste, I suppose.  Many people found this to be likeable.  I found the flavor to be superior to the aromas,

For me, the wine of the tasting!  Head and shoulders above the rest of the crowd, this is a special bottling that's dominated by Syrah.  A few months in oak don't hurt, either!  The wine had a wonderful cedar, sandalwood fragrance with plummy, ripe fruit and a bit of spice.  There's a light touch of anise on the palate, as well.  Beautifully balanced, 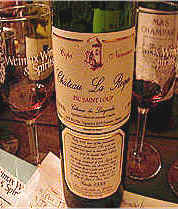 The group favorite is a special bottling from La Roque.  Much like the other wine of this property, "Cupa Numismae," named after an ancient coin found on the estate, is also a fairly jammy, somewhat over-ripe affair with sweet fruit elements and a bit of tannin.  Nothing special in my book, but others enjoyed it.