We've been led to believe by wine writers that the 1998 vintage is of modest quality when it comes to California Cabernets.

Allan Anderson, in a rare moment of silence, prayed for two things:
1.) His favorite wine in the tasting to be affordable (that is, less than $8 a bottle) and
2.) Mark Naismith (seen pouring above/left) wouldn't empty the bottles before Allan got a chance to pour for himself (Mark has the biggest wine glasses). 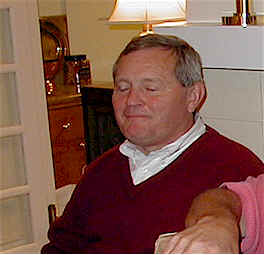 Wineries have led us to believe the wines are superior to 1996 and 1997 vintages, as they're charging, in many cases, prices that are 10% (or more) higher than the preceding vintages.

In an effort to get form our own opinion, ring-leader Jacques (Jack) Sweitzer put together a set of Cabernets and we got down to business. 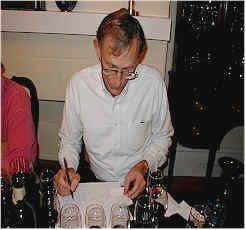 Jack, a professional bean counter, does the math.
No re-count was required.

The wines were remarkably good!
Not a stinker in the bunch, you'll notice many wines received first and last place votes.

8th Place: MOUNT EDEN VINEYARDS
The aromas of Mount Eden's Cabernet were sweet and berryish to start, with good fruit and vanillin notes and even a hint of cedar.  I felt the wine began to show a slight metallic fragrance, which caused me to mark it down.  The flavors were similar to the nose, though the metallic character was undetectable.  Three to five years of aging would be about right.  One star (on a three star scale, 0 being standard or average quality).

Showing lots of blackberry and licorice notes, there's a nice hint of wood to this somewhat "old-fashioned" Cabernet.  The tannin level is a bit on the high side, but the wine may weather the test of time nicely, needing 5-10 years to soften.  It's one of the nicest wines I've tasted of this label.  One star.

6th Place:  QUINTANA North Coast
You can see the drop in the intensity of this wine.  Though I ranked it higher than many tasters, this does show some of the herbal, green tea notes that are probably the result of some immature fruit.  It has a bit more tannin than it needs, but is quite acceptable.  Three to eight years of aging potential.  One star. 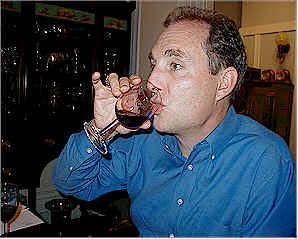 Hanns Hartmann Made a Rare Appearance. 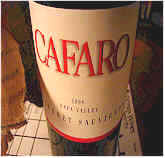 I found this to have some earthy, tarry and tobacco-like notes, along with a sweet, creamy, vanillin quality from the oak.  Quite complex in the aroma.  The wine is certainly tannic and structured, yet seems to have an appropriate level of fruit on the palate to warrant the lashing of astringency.  Quite complex and deep, this is a wine for a real Cabernet fan.  Five to ten years of cellaring potential.  One-and-a-half stars.

4th Place:  BENZIGER Sonoma
Lots of berry notes, especially hinting at blackberry.  Not particularly profound, but certainly a pleasant enough wine with lots of fruit on the palate and mild, softer tannins.
One star.

3rd Place:  HONIG Napa
Some people speak of the character of Cabernet fruit from Rutherford as being "dusty" (there's even a Rutherford Dust Society), but I noted this as having lightly herbal and 'dusty' notes on its aroma.  There's a creamy texture and some woodsy notes on the palate with a mildly tannic finish.  Five to ten years of aging potential, I gave this a one star rating.

2nd Place:  LIVINGSTON "Stanley's"
What a lovely nose on this wine!  Lots of fruit, but also there's sweet spices reminiscent of cinnamon, nutmeg with a coffeeish note.  The wine is refined and elegant on the palate, a shade lighter than most of the rest, but so pretty!  Good oak, too.  Five to ten years aging potential.  Two stars.

Woodsy notes dominate the nose, showing a pencil shaving sort of fragrance.  I was reminded of American oak, given the wine's somewhat ashy, woodsy fragrances.  The oak comes through prominently on the palate, with lots of blackcurrant fruit, too.
Five to ten years of cellaring potential.  One-and-a-half stars.