I was again teamed with Patrick Comiskey of Wine & Spirits Magazine (a magazine which actually writes about wine!) and Shana Dilworth who's a sommelier at Jardinire restaurant.

We immediately got busy and tasted a bunch of Chardonnays...nothing like a "test"  to start the day!

Patrick Comiskey wonders "What were they thinking?!?!"
Some of the wines we taste are actually very fine, while a few are most curious.

Joe Zapata found he had big shoes to fill, being a first year judge.  Fortunately he was able to find wines with the most "sole."

Joe took a shine to the task...noting he's not a fan of "Barefoot" wines.  "How could I be with a name like Zapata?"

Jane proved to be a Georgia Peach-of-a-wine-taster, having no trouble at all in "Rate"-ing the wines.
(Jane Rate is the sommelier at The Lodge at Sea Island in Georgia, a spiffy resort featuring vittles, vino and golf.)

Denise Johnson of the Napa Valley Winery Exchange in The City found one worth tasting!

Steve Pitcher is a Riesling fanatic and writes for The Wine News, another rare American publication which actually features articles about wine!

Ke-Vino Vogt has an eye for good wines.  He's a Master Sommelier, routinely uncorking grand wines for guests at the Delmonico Steakhouse in Las Vegas.  He seems stunned in tasting this entry...
"Man, someone kicked this up a notch!"

Thom Elkjer lives in Wine Country Dot Com when he's not fishing for flies.  His alter ego is Rigel Linx and he has a wry wit.
Thom is a critical wine judge and is not easily baited into awarding gold medals. 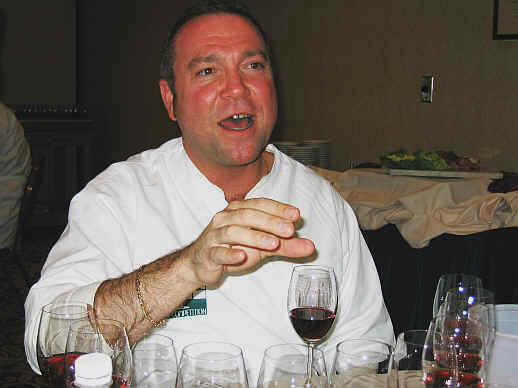 Jeffrey Stivers, who works in a famous Los Angeles restaurant named after a species of insect, seems "bugged" by this wine.
He's the wine guy at LA's prestigious "Cicada" restaurant.  I heard someone call him by the nickname "Grasshopper," but don't know precisely why, though I have a theory on this...

Gary Blackwell of, uh, Blackwell's Wines & Spirits in The City, is a big fan of fun wines.  When he's not tasting wines, he's critiquing the attire of those in the wine industry.  His list of "Best Worst-Dressed Wine Folks*" is an annual must!  This juicy list is more of a must than a tank of juice about to be fermented at some Napa winery.
*I'm routinely on the list.  Most folks think I buy my clothes at Goodwill.
But they're wrong!
Salvation Army!!

Renay Santero of Oliver's Market in Cotati and Santa Rosa, reflects on the character of this wine.
"Mirror, mirror, in the glass,
Does this winemaker know his elbow from his..."

Nick Ponomareff writes the California Grapevine wine-letter.  He credits his enological exploits back to his Wine-Tasting 101 Class at Haverford High, not far from the Chaddsford winery in Pennsylvania.  This may account for why Nick is always on the panel which tastes Chambourcin and Niagara wines.

There once was a guy named Rusty,
Who's got a palate that's trusty.
He swirled and he sniffed,
The rating came swift:
"It'd be better if it wasn't so musty!"
Rusty Albert of the Wine Impressions store at Laurel Village in San Francisco...

Alex Fox easily determines which wines are a hit and which ones are a myth.
He's the talented sommelier at San Francisco's Myth Restaurant, a place with a good wine list featuring quality and value.

Jerry Cooper.
He's trading in his sanity for an opportunity to run a little wine emporium called "Friendly Spirits" in San Francisco.   Jerry is retiring from his gig with The Estates Group, a division of YMCO (stands for 'you'll make commission occasionally').

Steve Bell routinely chimes in with his tasting results.
"Of course I like the wines of Carillon," he explains, "as well as the Bordeaux wine of Chateau Angelus, but I don't think they've entered their wines here today."
Steve's associated with the Juslyn winery in Napa, a short distance from the Footcandy shoe shop in St. Helena.
"One size fits all," says Steve.  His favorite size is 750ml, although "I do like magnums."