Sunday morning we meet again, the volunteers having been there well before the judges.  They're busy preparing the wines for another "fire drill" of wine tasting. 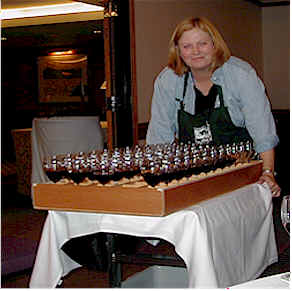 Nijole wheels in another round of wines for us to taste. 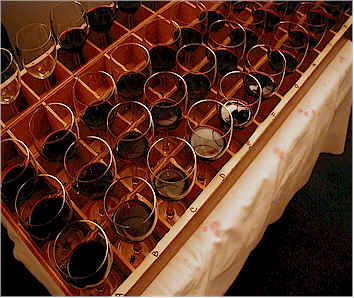 Keeping all the glasses organized is a Herculean task, yet these people manage. 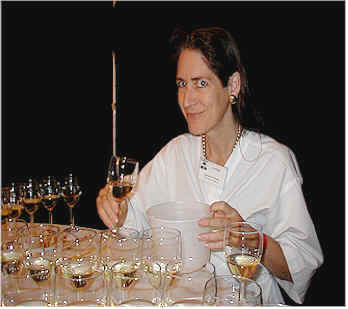 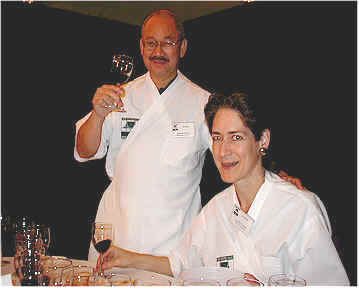 Wilfred Wong checked in on us to "make sure we were doing a good job" and to butter us up.  Like most people who've known Wilfred for a few minutes, we weren't buying it. 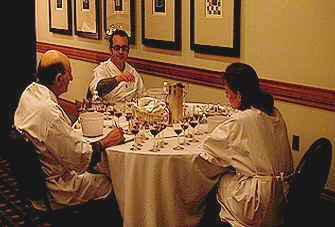 Art Damond says he likes to taste wine with people who "have a good sense of humor."
Good thing, too.
Here's a photo of Art sitting on one of those Whoppee Cushions that Catherine Fallis left on his chair.
Art apparently thought someone had just opened another bottle of wine.

Our stellar crew of Dan, Nijole and Sally enjoyed a rare ten seconds of rest during this marathon.  My digital camera is not sharp enough to pick up the smoke coming out of Dan's shoe. 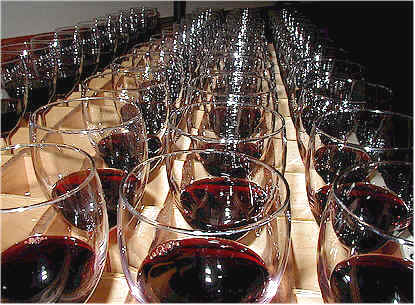 We tasted a big line-up of Cabernets from the 2000 vintage.  We even voted a number of wines into the "Best of Show" judging, selecting a few wines as "Double Golds," something my panel hadn't done in previous years.

After we wrap up the Sunday morning judging, the office crew enters all the information in the computer, tabulating the results and selecting the wines for the "Best of Show" judging later in the afternoon. 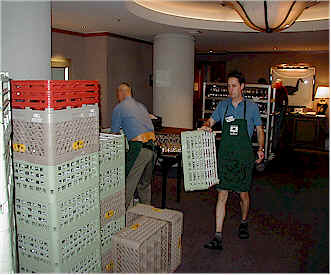 The volunteers continue their hard work, washing glasses, knowing we're only going to get them dirty again!

The judges then get a little break for lunch. 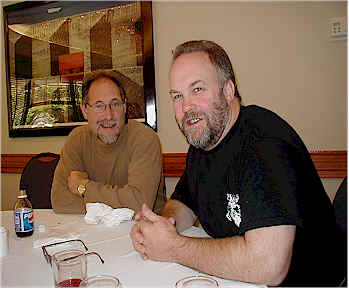 I looked around the room and see all these celebrities.
The photo above depicts Joel Butler, MW and Drake McCarthy.  And, yes, that is a bottle of Pepsi near Mr. Butler.  Joel was able to tell us, in greater detail than we needed, frankly, about the ingredients in Pepsi.
"It contains natural flavors, including extracts of the kola nut, vanilla beans and flavor oils derived from natural sources such as citrus and other fruits. Caramel (made from corn sugar) adds color and flavor to Pepsi." Joel explained.  I missed taking the photo of the three people who fell asleep during this dissertation, having nodded off myself.

We returned to the main tasting room and found an interesting display of some of the corks which had been blamed for tainting some bottles of wine with a "musty" character.  About 5% of the bottles with cork closures are plagued by this problem.  That's why a number of wineries are starting to use screw caps which won't cause this "musty" character to develop in the wine. 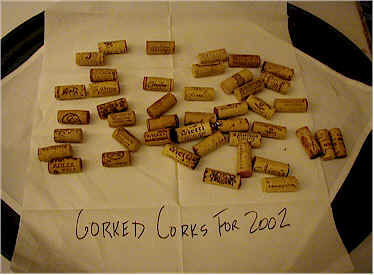 Our panel found a number of wines to be "corked."  Unfortunately, a few of those wines actually were superior to the wine which wasn't affected! 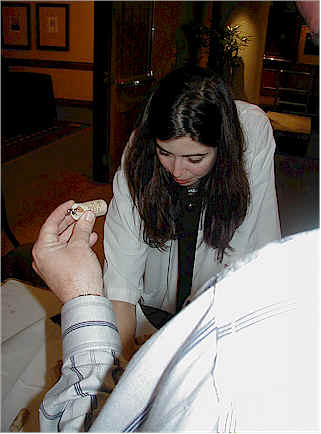 The famous Rebecca Chapa has a look at the various corks.

As we watched, a beehive of activity was taking place, the volunteer crew being busy pouring 41 wines which were in the lofty "Double Gold" category. 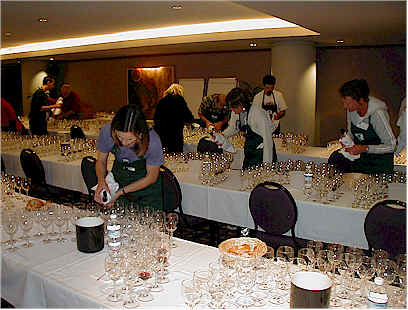 You think holding a wine tasting is easy?  Try organizing one at your house with just 8 wines and you'll feel like it's your first day on the job at Ringling Brothers/Barnum & Bailey's Circus and the lions are loose. 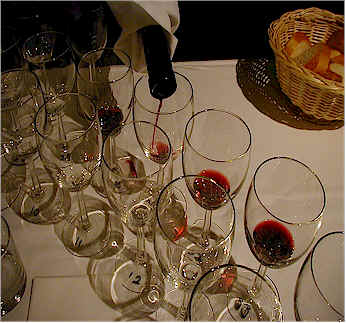 As the judges are seated, Andy serenades the group with his rendition of  "How Can I Miss You When You Won't Go Away."

He also set the ground rules for the tasting, explaining to some of the dimmer bulbs in this wine-tasting 'chandelier' to "Taste the white wines.  These are the next nine wines.  It's when you get to the glass where the color changes that you stop." 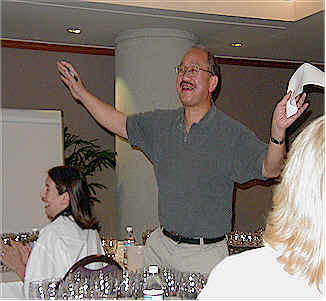 Of course, there's always someone in the crowd who needs additional explanation.

A nice gentleman tabulated the scores, accurately counting the number of hands raised to vote for each wine.  Some judges tried to cheat by raising both hands, but this fellow wasn't fooled by these pranksters.  Though he wore a vest, I am sure this guy was in possession of a plastic pocket protector.  Guys who wear those are hard to fool.

We tasted a couple of very nice Champagnes, selecting what turned out to be the 1989 Lanson "Noble Cuve" as the best sparkling wine of the year. 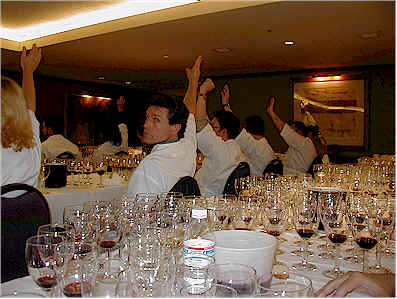 For those who think only the fanciest, most snobby, elite wines come from the most boutique producers around the world, the wines that made this round of "the best" included Sutter Home (Gewrztraminer), Meridian (Chardonnay), Kenwood (Zinfandel) and Wolf Blass (Shiraz).  Three of those entries cost ten bucks or less!

This was a lovely way to spend the weekend, helping make the wine world a safer place for consumers.

CLICK HERE TO VISIT THE OFFICIAL WEB SITE OF THE JUDGING TO SEE THE AWARD WINNERS.

CLICK HERE TO RETURN TO THE FIRST PAGE OF THE 2002 WINE MARATHON.