This label was prominent in the early 1900s, a label used for export from the "California Wine Association."  The CWA had, at its peak, some 64 wineries.

Much wine was stored in San Francisco and was destroyed in the 1906 earthquake.  The director of the CWA, Percy T. Morgan, then built what was the world's largest winery at that time.  He called it "Winehaven" and it was located on the San Francisco Bay in Richmond.  There was a pier to accommodate ocean-going vessels and wines under the "Calwa" label were sold in bottle and the "Big Tree" brand was used for wines shipped in barrel. 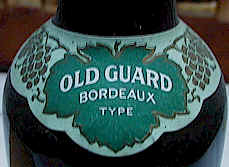 The neck label of this bottle shows the wine to be "Old Guard," a precursor, I suppose, to today's "Meritage" nomenclature.
Morgan's Winehaven was emptied in 1937 and became a Naval fueling depot. 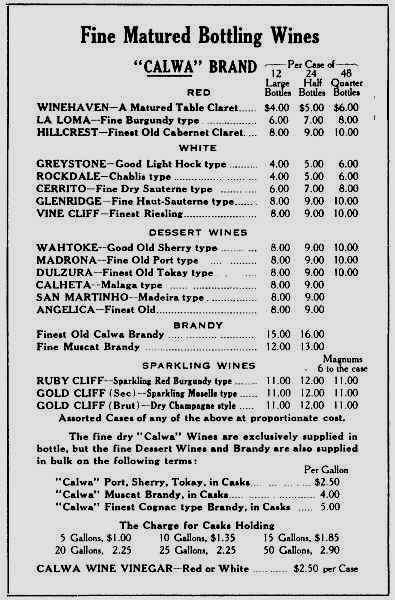 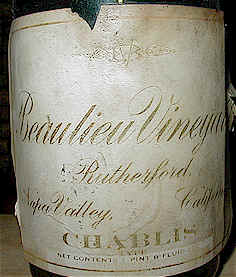 Most California wines were sold with European wine names on the labels.  Despite the fact that to call the wine "Chablis" in France, the wine must have been made from fruit grown and vinified in that particular region, Napa Valley vintners such as Georges de Latour's "Beaulieu Vineyards" sold plenty of locally-grown Chablis!
BV's "Burgundy" won the Golden Gate International Exposition's grand prize as best wine.  It was made of a little-known grape called Cabernet Sauvignon. 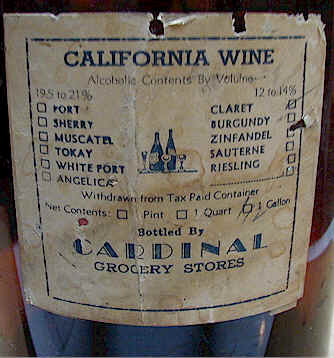 Used by the Cardinal Grocery store company, what this label lacks in artistry, it makes up for in utilitarianism.
All the wine types and alcohol contents are listed and they'd simply mark the appropriate box to signify the wine type.
Nobody had heard of Cabernet Sauvignon, Chardonnay, Sauvignon Blanc or Merlot in those days.
Though this label has checkable boxes for the "net contents" of a pint, quart and gallon, this label is attached to a "half-gallon"-sized bottle.  With a finger hole.  Must have been a mighty fine Claret! 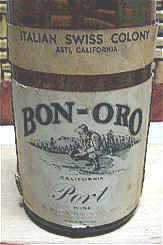 Made by the Italian Swiss Colony winery in Asti, California (Northern Sonoma), here's a quart-bottle of "Port" from California. 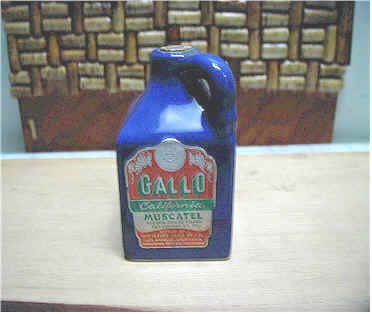 The Gallo brothers started their little enterprise in 1933, renting an old warehouse in Modesto and buying redwood tanks and obtaining a crusher.  They had figured Prohibition would end and started studying winemaking while they were in the Modesto Junior College.

In his book "The Wines of America," Leon Adams recalls visiting the Gallos:
"I remember stopping there one day in the late 1930s.  In a cramped office in front of the cellar I found young Ernest Gallo.  He told me that he and his brothers were only making bulk wine to get started, but that someday the Gallo name with their family crest (the rooster, for which 'gallo' is the Italian word) would appear on bottles that would be sold throughout the United States.  His confidence impressed me, though his chances didn't....
When the Gallo name first appeared on bottles in 1940, the brothers aimed at a specific goal: to become the Campbell Soup Company of the wine industry..."

The little bottle pictured above with the Gallo name, is a Muscatel.  The bottle, only a few inches in height, couldn't have contained more than 3 or 4 ounces of fine wine.

The Gallo brothers tried to buy Italian Swiss Colony in 1953.  Petri bought ISC and in 1957 built a tanker ship for $7 million which Adams says allowed them to sell their wines in the Eastern U.S. for ten cents a bottle less than the competition.  The Gallo brothers built a bottle-making factory, cutting down their cost of glass and were able to match Petri's price and advertise their wine as being "bottled in California."

Petri and Italian Swiss Colony are distant memories today, though Gallo, I believe, is still in business. 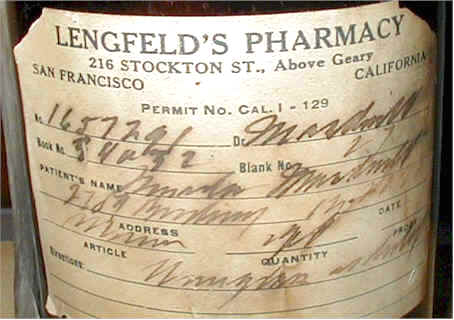 During Prohibition, you needed to either make your own wine, be a priest and have access to the Sacramental wines or get a doctor's prescription and pay a visit to your local pharmacy.
This fascinating back-label for Lengfeld's Pharmacy in San Francisco has the doctor's name, the patient's name and address and the "article" is described as "wine."  In the line for "Directions" it's written:  "Wineglass as needed."

Many wine industry leaders were apprehensive when a Coca-Cola bottling firm purchased a winery in California.
Even more curious was when THE Coca-Cola company (not just a franchisee) bought Sterling Vineyards in Napa.
Would they offer Napa Valley Chardonnay in 12-ounce cans?
Would Napa Valley Merlot come in 6-packs?
Would there be 2 liter, plastic jugs of Napa Cabernet?
While Coke was a master marketer of soft drinks, it seems the tricky world of wine was more than it could handle.

Yet here's a pre-Prohibition bottle of California Zinfandel, bottled by a Coke bottler in Portland, Maine.
"A wholesome, invigorating stimulant" reads the label.
Thanks to Peter Kruse for sending this entry.

Here's an old label from the Joseph Phelps winery.  When they were just getting started they offered some modest wines under this label.
Give them credit: they didn't call their generic wines "Burgundy" and "Chablis"!

A fellow named Mike Robbins started this little enterprise along the St. Helena Highway near Charles Krug.  He sold the building to another fellow who started the "St. Clement" winery in that beautiful old Victorian.
Robbins moved his facility to a location at the base of Spring Mountain.  The winery made some outstanding wines in the early to mid-1970s.
John Williams moved west from the Finger Lakes region of New York and was the winemaker for Spring Mountain, starting a little brand called "Frog's Leap" with a fellow named Larry Turley.  Spring Mountain was also the site of an American TV soap opera called "Falcon Crest" and wine was made using that name.
Robbins, we were told, lost the winery in a nasty divorce settlement, something of a soap opera of its own! 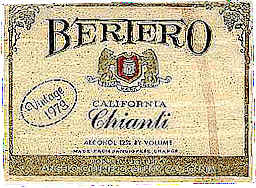 The Bertero winery was located on the Hecker Pass Highway in Gilroy, across the road from the Live Oak winery.  Angelo Bertero was an "old time," grizzled veteran of the California wine industry, making some strong red wines which were made the "old fashioned way."  I recall buying Cabernet and Zinfandel from this family back in the 1970s....some of the wines, especially the reds, were pretty good, but the quality of the white wines was a bit uneven.   This was good, old-fashioned, low-tech winemaking and low-pressure wine-selling.

I recently saw a bottle of their "old label" wine...

I have fond memories of stopping at Gilroy's Live Oaks winery, directly across the street from Angelo Bertero's digs.

Pete was a bit of a show man, offering up one of the smoother and more polished wines on the Hecker Pass Highway.

He was a genial, pleasant, good-natured fellow, offering old-time wine at old time prices.  I think we used to have to charge five bucks for a half-gallon jug, complete with finger hole in the old, old days.  Pete moved into a more modern jug that didn't have the finger hole in later years.  Tastes were usually poured into a small shot glass.

"Peter, what's in your Live Oaks Burgundy?"
"Like I say, boys," he'd start, "this here Burgundy is one-third Cabernet Sauvignon, one-third Pinot Noir and one-third Zinfandel."
Whatever it was, it was not a bad little wine.

Our Vino Fino tasting group had a bottle of Live Oaks "Premium" Burgundy in a blind tasting of Pinot Noirs one year...and it won the tasting!


Peter was amused by the prices other vintners would charge for a bottle of wine.  I suppose when you're getting a couple of dollars a bottle, it was pretty amazing some brazen characters like "that Robert Mondavi in Napa" or that "Field fellow in Amador" could have the nerve to charge four or five dollars!

Pete used to tell me about Carignane and I suspected his wine was not precisely the "blend" he claimed to be present in the wine.  I figured he was buying some juice from out in the Central Valley and that Carignane was present in his "Burgundy."  He mentioned that an old Fresno State professor who was an ampelographer claimed that old vine Carignane was often superior to the increasingly more fashionable Cabernet Sauvignon.

Pete was aided by his cellar man, Mitsi (I suppose he was Mitsuko) Takemoto.

One year we had a dinner with a bunch of wine geeks.  I poured Live Oaks Burgundy into an empty bottle of Château Petrus.  I filled the Live Oaks' screw-cap jug with the very trendy (and good) Silver Oak Cabernet.  The Petrus bottle was admired by many, though one taster asked "Is this really Petrus?"  Others at the table swooned over the Petrus bottle, claiming it was the "best wine I've ever tasted."
The Live Oaks' jug went around and the tasters had a sip, but hardly anybody paid any attention to it, despite its lavish oak and deep Cabernet fruit.  The same fellow who questioned the authenticity of the Petrus also asked "Is this really Live Oaks Burgundy?"   I watched in amusement as people swirled and sipped...seeing just how important the label was to some folk's enjoyment of a bottle of wine!

Pete Scagliotti may be gone, but he's not forgotten.  He was a sweet and gentle man and a dear friend to me back in the 1970s!!!

Thanks to Don Ravanelli for sending me the Live Oaks labels! 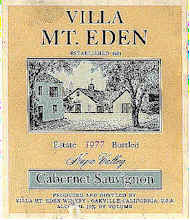 Nils Venge was the original winemaker at this little place in Oakville.  He made some wonderful wines from the start...the 1978 was one of the top wines of the vintage!
The owners sold the place and today a tobacco firm owns the Villa Mount Eden label.  The original facility is now called Plumpjack and is owned by some moneyed folks named Getty.  The consulting winemaker?  Nils Venge!

The more things change, the more they stay the same? 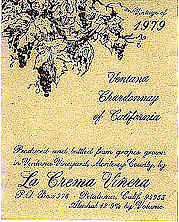 Back in the late 1970s a winery was started by a bunch of buddies, one of whom could make wine.  At least, that's what we were told.  Rod Berglund was the winemaker.  Today he's in charge of making the wines of Joseph Swan, having married Swan's daughter.

I recall someone telling us the name of the winery, La Crema Vinera, was especially melodious to those who spoke Spanish.  "The cream of the vineyard."  Some of the wines were pretty good...or, at least they tasted good and richer, oakier and more buttery than most wines made in that era.

The brand couldn't survive and was sold.  Today it's simply called "La Crema" and is affiliated with the Kendall-Jackson collection of wines.

If you have old and potentially interesting bottles for inclusion in this gallery, give me a call or stop by.  I might choose to photograph them and add them to these pages.