Paul Masson came from Burgundy to California to work for Charles LeFranc, who owned what became Almaden Vineyards.  Masson started his own business in the 1880s, purchasing property in the Santa Cruz Mountains' area of Saratoga.  It was the La Cresta property and Masson imported cuttings from France and started a vineyard.  He later married LeFranc's daughter and was instrumental in marketing LeFranc's wines

Paul Masson was a viable brand of, at least, "decent" quality wine back in the late 1960s and early 1970s.  Napa Valley was prominent, of course, with brands such as Christian Brothers, Charles Krug, Beaulieu Vineyard and Inglenook.  Beringer Brothers was a long time producer, but its wines had slipped in quality until its purchase by the Swiss company called "Nestle."
Meanwhile, Sonoma had Sebastiani as a major winemaking entity, along with the huge Italian Swiss Colony brand.
In the Santa Clara Valley, the Almaden winery and Paul Masson were major players.  Mirassou was just getting started in those days and there were some lovely fortified wines coming from the Richert winery in Morgan Hill and Llords and Elwood over in Fremont (of all places!).  Southern Santa Clara County had a modest wine industry with the San Martin Winery cranking out nice fruit wines and the Hecker Pass Highway had some old and new little wineries.  Mountain View was home to the Gemello Winery, a small cellar run with great skill by Mario Gemello.
There was also a modest winery run by the Jesuit Brothers at the old Novitiate Winery in Saratoga.

Paul Masson, though, was a very large California wine company and we pay tribute to it here in our own small way.

Orson Welles, who had done an ad for a Spanish Sherry, was enlisted by the Paul Masson winery to be its spokesman.  Welles would intone "We will sell no wine before its time," which became extremely popular as an advertising "moment."

To See The Finished Ad Where He's Not Loaded, Click Here.

An Ad for Paul Masson Burgundy from 1980
Click Here

Since you'll only have dinner once tonight, why not do it right the first time?

Paul Masson made wines from some U.C. Davis hybrid varieties.  Rubion was made of Ruby Cabernet, a cross of the prolific Carignane with the lower yielding and more complex grape, Cabernet Sauvignon.

Another version of the same... 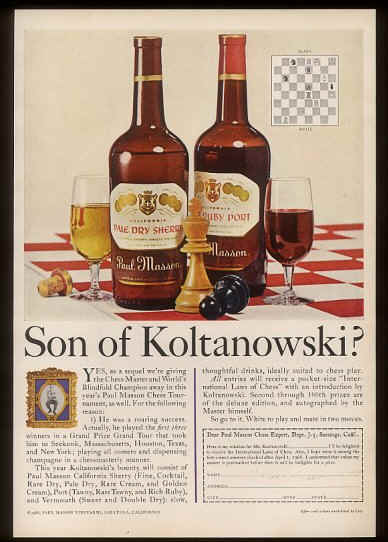 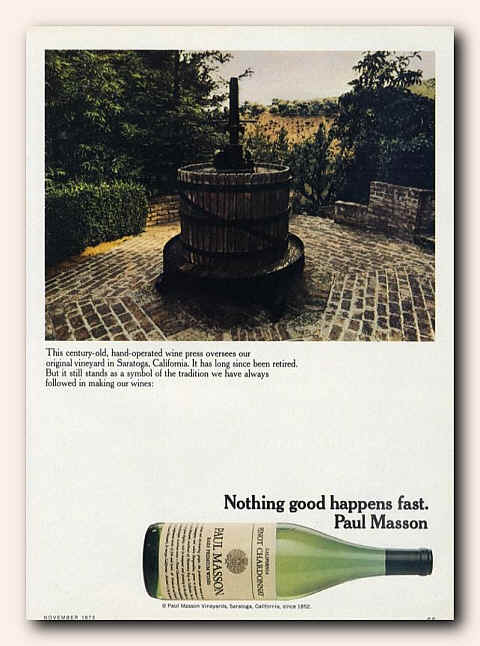 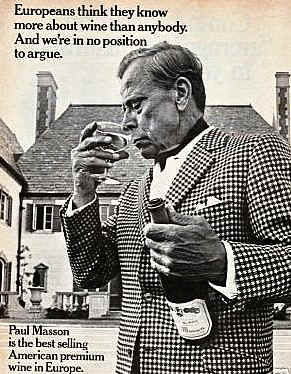 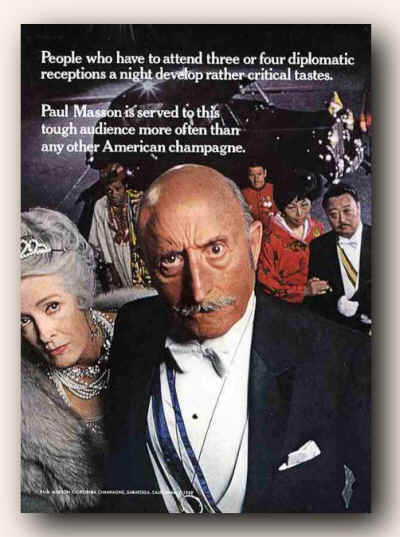 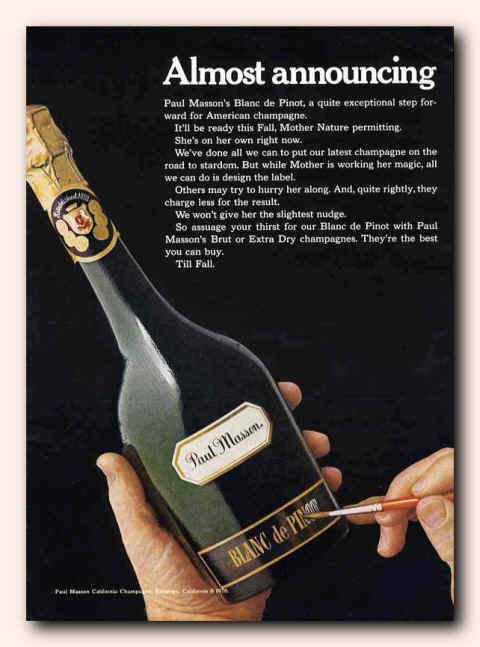 An old postcard showing a tour group at the old Paul Masson winery in Saratoga.

The caption of the vineyard scene notes "3000 acre vineyard at Wineville, California."
Anybody have a clue where "Wineville" is or was? 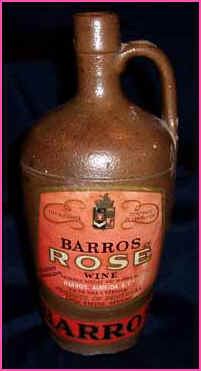 To help sell these wines, many producers in Portugal would "bottle" their ros wines in clay or stone flagons...some people thought these were a crock... 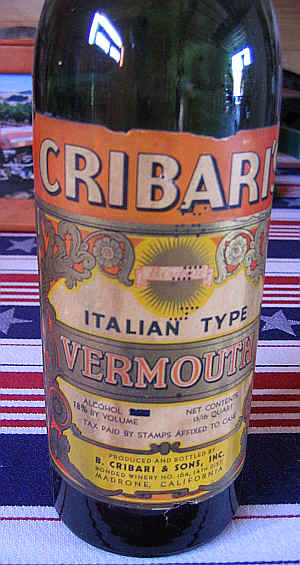 The Cribari winery offered a range of "fortified" wines, including Vermouth. 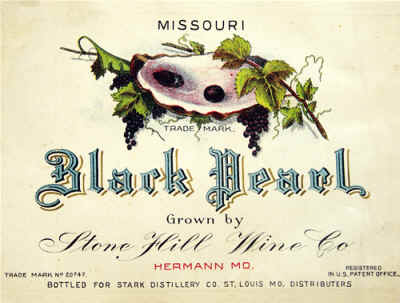 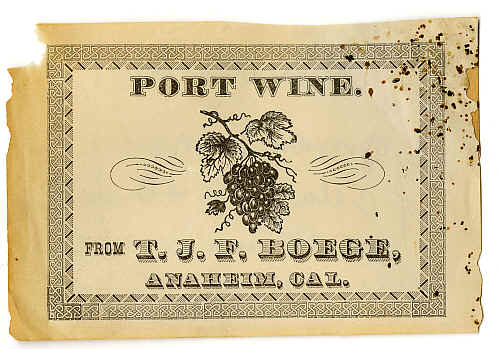 Anaheim had a bottler of "Port" way back when! 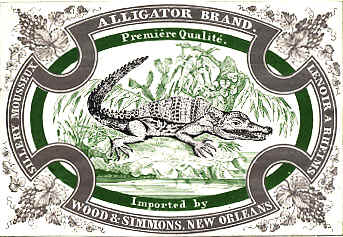 From a French sparkling wine...
An early "critter" label! 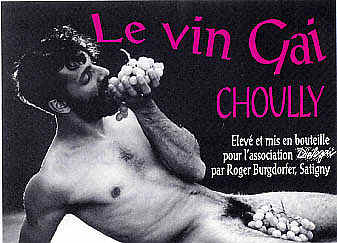 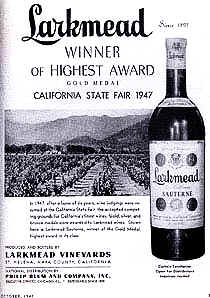 The Larkmead label still exists, but they no longer make "Sauterne." 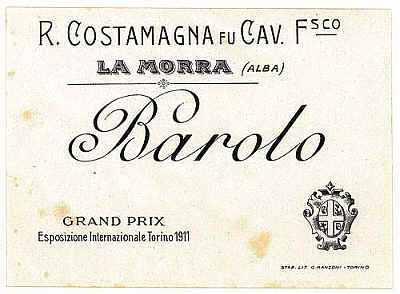 An old label of the Rocche Costamagna winery in the Barolo town of La Morra. 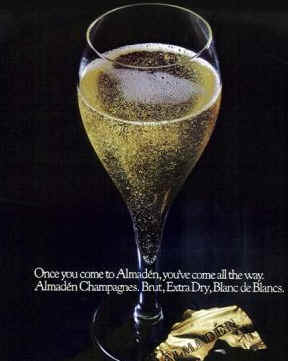 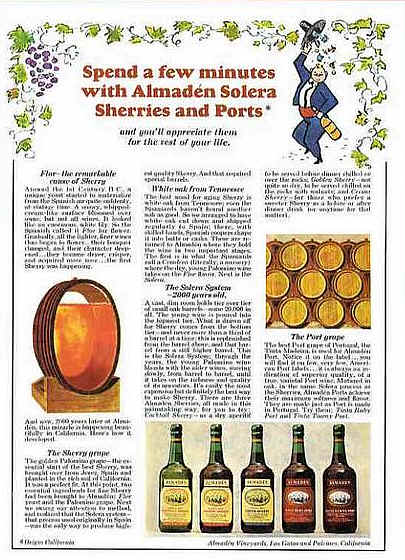 An old ad for "sherry" wines from Almaden. 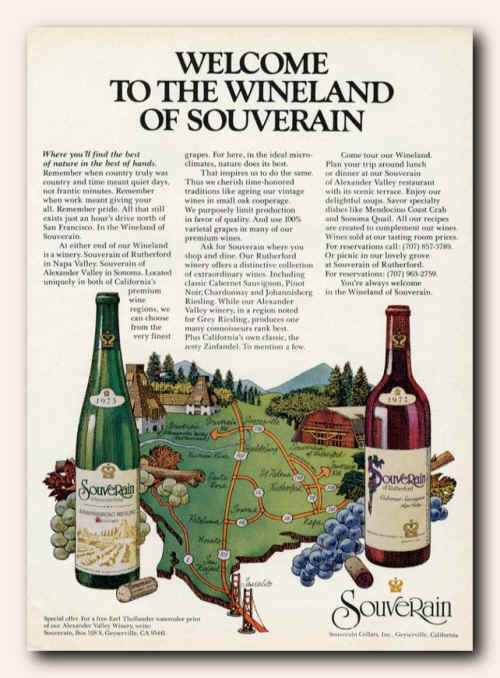 Back in the 1980s, Souverain had a winery in Sonoma (originally called "Chateau Souverain) and one in the Napa Valley.
Today the Sonoma facility is owned by Francis Ford Coppola and the Napa winery is "Rutherford Hill." 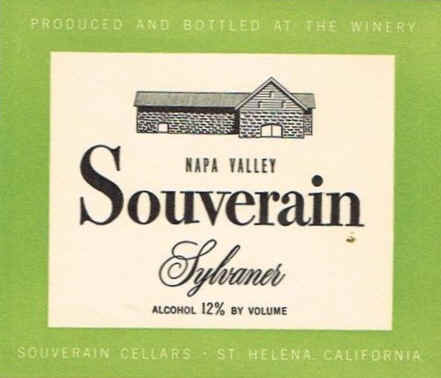 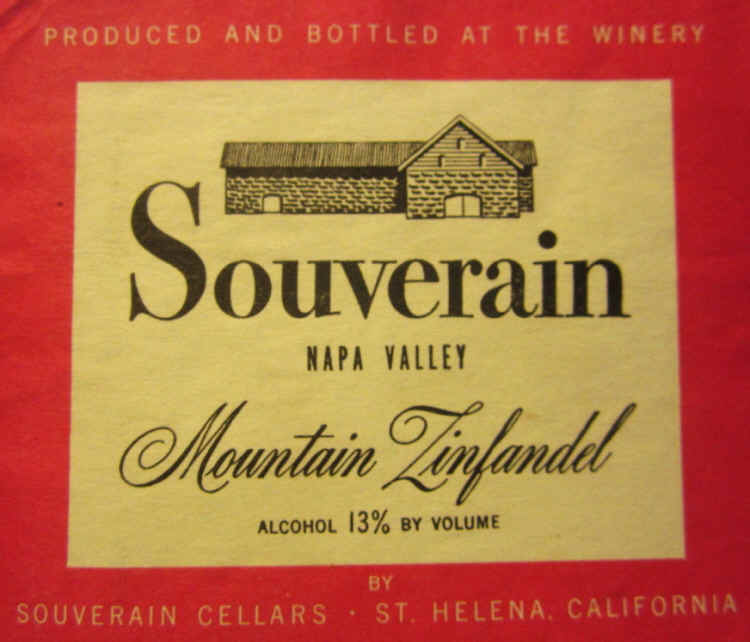 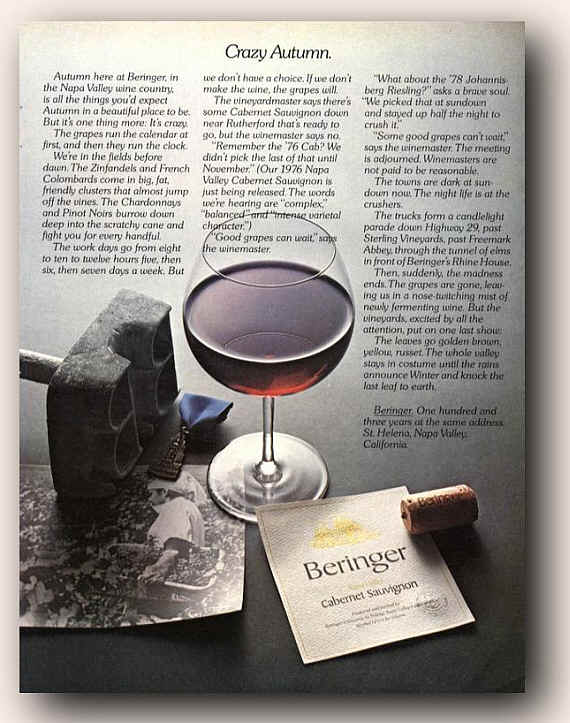 A postcard from the early 1900s....the only Inglenook winery in Rutherford.

I wonder if this Arco Claret tasted anything like gasoline?
Bottled in San Francisco... 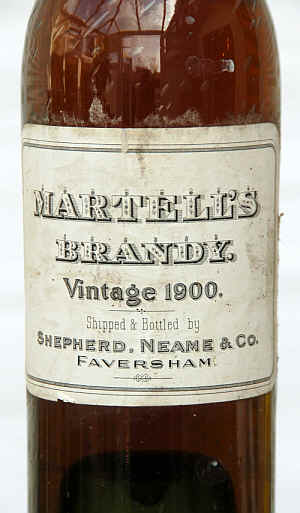 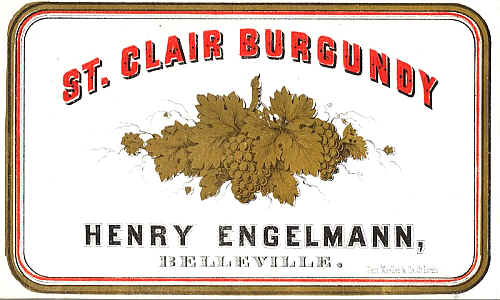 Here's an ad in a the "program" for the Golden Gate Bridge "Fiesta"...the opening of the bridge in 1937.
Italian Swiss Colony took out an ad to invite people to cross the bridge and visit their winery in Sonoma. 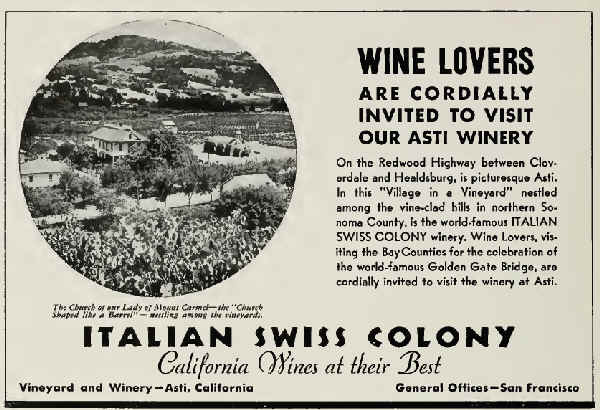 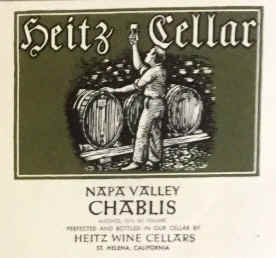 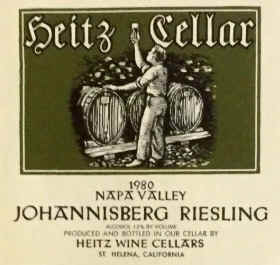 Jo-Berg as it used to be called. 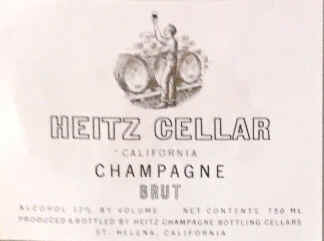 Probably this was made by Hanns Kornell for Joe Heitz. 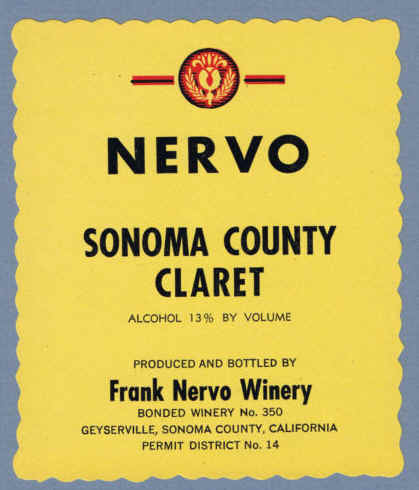 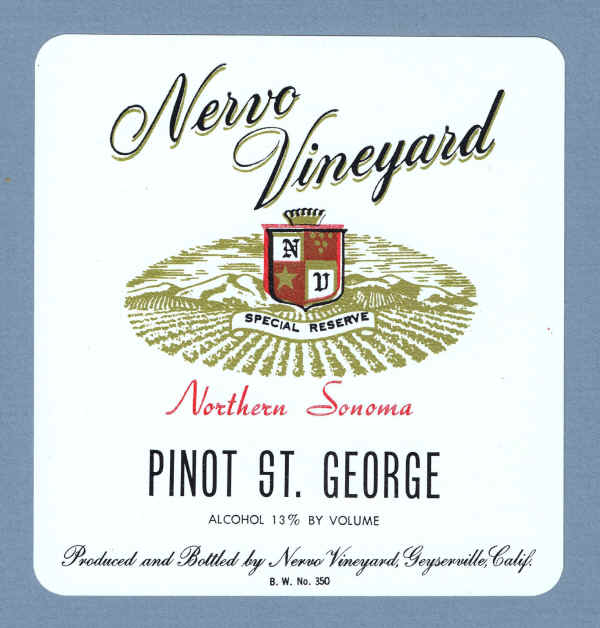 Pinot St. George was made by a number of wineries in Napa and Sonoma back in the 1950s and 1960s.
The grape is called Negrette in France and comes from the Fronton region... 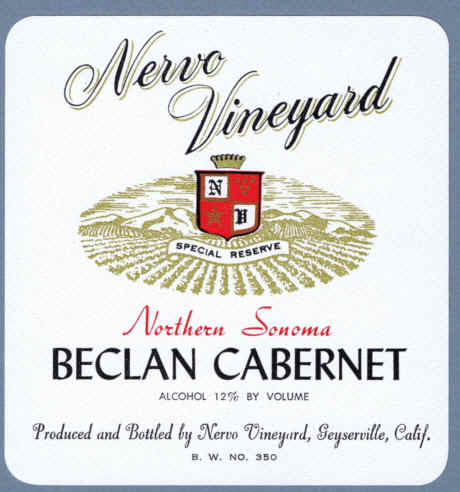 We don't know much about the Beclan grape.  There's an assessment of the viability of Cabernet Sauvignon in the post-Prohibition era and a prominent UC Davis viticulture expert said he thought Tannat, Petite Sirah and Beclan were likely more commercially viable in California than Cabernet Sauvignon!!!
The grape is still planted in California apparently, but typically has been found mixed in with other reds in, say, a Zinfandel field blend. 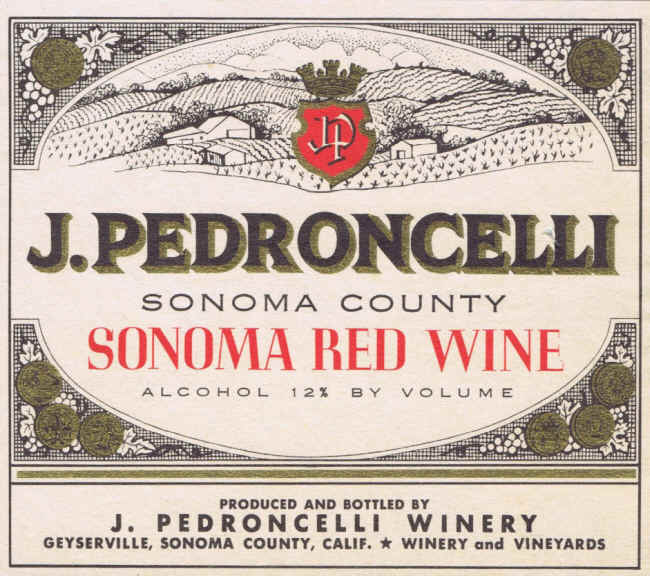 Our friends at the Pedroncelli winery had this cool design back in the 1970s, or so...
They used it a few years ago on a Zinfandel bottling which was done solely in magnum...
But we love this classic, retro design. 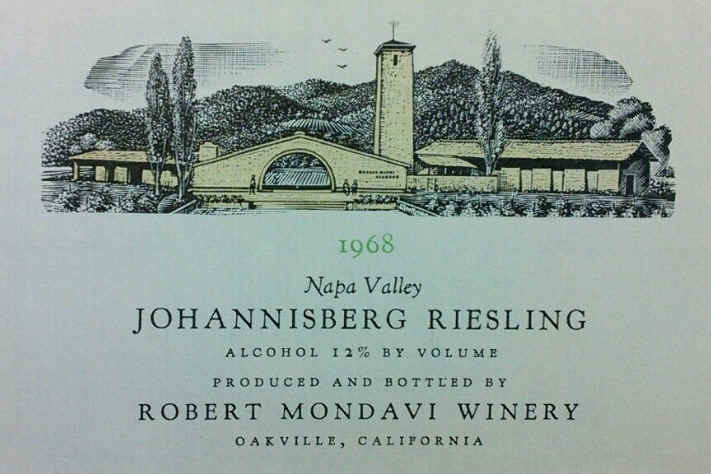 BACK TO THE FIRST ENO-NOSTALGIA PAGE