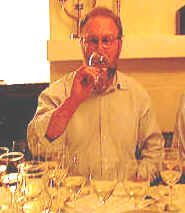 Host Gary Peer was interested to sample really "dry" Chardonnays and selected the them of Carneros-grown wines.
We had a good cross-section of Chardonnays which ranged in price from affordable to deluxe. 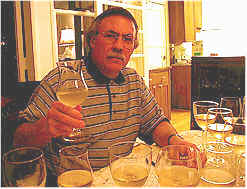 The photo on the left is of Mark Naismith, shown holding the "...without a doubt, clear winner...anyone not rating this wine first is a knucklehead." 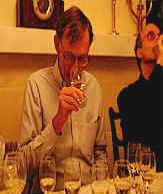 Jacques Sweitzer, an original Vino Fino taster, carefully evaluates the wines.  Jack is a bean counter, so he's in charge of finances.

Jim, sitting next to him, is a "rookie" member of the group.  Poor guy (Jim) received much abuse from Mr. Naismith, having rated Mark's first place wine 7th and Mark rating 2nd Jim's last place selection.

8th Place:  ABUNDANCE 1999 "Leveroni" CHARDONNAY
Jack and I were the only tasters who gave high marks to this wine.  I liked the woodsy, American oak notes.  It's dry, nicely balanced, with sweet oak and a vanillin component.  One-and-a-half stars.

7th Place:  ANCIEN 1999 Carneros CHARDONNAY
I found hints of cream and butter in this elegant Chardonnay.  The wine is dry and of medium intensity with a hint of a stony note on the nose.  The same elements are present on the palate.  One star.

6th Place:  MacROSTIE 1999 Carneros CHARDONNAY
Fruity elements are displayed here in this bright, citrusy Chardonnay.   I found a hint of a pineapple fragrance, too.  MacRostie's Chardonnay is soft and "easy" on the palate, but I marked it down for showing a bit of alcohol.
One-half star.

4th Place:  SAINTSBURY 1999 Carneros CHARDONNAY
Mildly citrusy notes combine with a touch of a minerally, stony note in this nicely complex wine.  There's a touch of a toasty element from some aging with the spent yeast.  On the palate this is mildly toasty and creamy....One star.

3rd Place:  TRUCHARD 1999 Carneros/Napa CHARDONNAY
Elegant and showing a nice creamy, vanillin character with similar notes on the palate...there's also a hint of a citrus or orange peel note on the palate.  One star.

2nd Place:  SOLITUDE 1999 Carneros CHARDONNAY
Though mildly fruity and showing some woodsy notes, I marked this down a bit for having a cardboard note....I am not sure this was a completely "sound" bottle, though it was not badly "corked" (musty)...woodsy and toasty on the palate.
Probably a one-star wine.

Even Dick Otstott rated the Chasseur as his top wine. 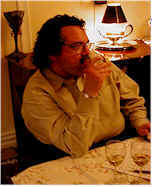 Alex is thinking "I'd rather be drinking Barolo!"