By virtue of the fact that France has been producing outstanding wines for the past few hundred years and that many of the wines made there are the "benchmark" by which others are judged, it stands to reason that France is the "center of the universe" when it comes to wine.

The third President of the United States, Thomas Jefferson, was a U.S. Ambassador to France and was a big fan of French wines. He had built two wine cellars into his home at Monticello and surrounded the residence with grapevines. One cellar was for bottled wines, while the other was for a barrel aging facility.

Jefferson hired an Italian man to plant vines and make wine at Monticello. There is a modest wine industry in Virginia today and some good vinifera wines are being made there. Jefferson also imported top Bordeaux wines to the U.S. He was also a fan of Champagne. Further, he advised George Washington and James Monroe as to what wines they should serve guests. 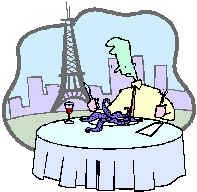 The average French citizen has grown up with wine on the table. It's been a part of their culture forever. Keep in mind, though, this does not make each and every French person a wine expert! There is a tremendous amount of "vin ordinaire" produced in France. These are wines made from high yielding vineyards and are usually dry and not particularly intensely flavored. These wines are put on the table without a shred of connoisseurship in mind. 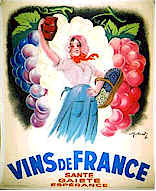 I can tell you about a dinner we had with some people who live a few miles from Avignon. I had purchased several vintages of Vieux-Telegraphe Chateauneuf-du-Pape at a shop, along with some Cotes du Rhone. One of my traveling companions asked what I intended to do with all these bottles. I told her we'd have them that evening with her aunt's leg of lamb. She was horrified, saying her cousins would not appreciate such wines, since they drink such modest quality "vin de table". I replied that, at the very least, her husband and I would appreciate them.

It was an incredible evening, watching this group of French people discovering wines made a few kilometers from their residences. They were amazed that wine could taste SO good!

When you buy a bottle of white wine labeled "Sancerre", for example, no place on the label does it say "Sauvignon Blanc". Similarly, a red labeled "Cote Rotie" is made of Syrah, but this fact is not noted on the front label. The laws in France prohibit someone from legally making a Chardonnay-based wine and calling it "Sancerre".

So you need to overcome your fear of having to familiarize yourself with French geography and the corresponding wine laws of each area. Or simply drop by the shop, tell us you want a French wine and what's on the dinner table and we'll make some suggestions.

While many people think "Imported Wines" are special and, therefore, expensive, best to think again. The exchange rate with the average French winery is far more favorable to the consumer than with most Napa Valley wineries. We have some exceptional wines from France which are VERY reasonably priced.

The French government was instrumental in encouraging growers in the vast south of France to rip out those varieties which were prolific producers of vin ordinaire and upgrade with more interesting, higher quality varieties. I can remember (not too many years ago) tasting numerous Languedoc wines, Fitou and Minervois, and being appalled at the amazingly poor viticulture and winemaking. That situation has changed DRAMATICALLY! Now there are dozens of above-average to really exceptional wines coming from what had been a sea of mediocre "plonk" (that's a British term for "everyday" wine).

We'll be delighted to give you our "Tour de France", selecting an assortment of wines from famous and not-so-famous places in France.

THE SOUTH-WEST, LANGUEDOC AND OTHER OBSCURE PLACES

WINES FROM THE FRENCH ALPS (SAVOIE)