We first started visiting this small estate in the northern part of Alsace back in the early 1990s.

Roland Schmitt's family has records indicating they've been farming in Alsace since the early 1600s!  Schmitt made some wonderful wines and I recall one of his larger competitors telling me "Schmitt is a lone voice in those woods...he's a very good winemaker."

Schmitt died in a tragic automobile accident and his wife, Anne-Marie, was hospitalized for more than a month.  She is, happily, fine now and is assisted in the cellar by her son.

We visited the winery in March 2002 and found a significant increase in quality. 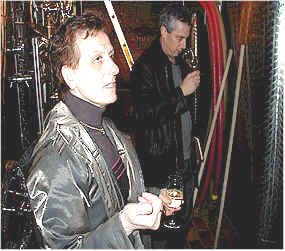 "Our style of wine," explains Anne Marie, "is dry and direct when they're young.  But they blossom and develop with bottle aging." 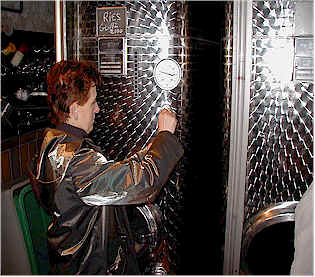 "The 2001 vintage was a challenge," according to Ms. Schmitt.  "The flowering went well, but after a fine summer, we had lots of rain during September as the grapes were beginning to mature.  As a result, we ended up 'de-classifying' our top wines."

We tasted the range of 2001 wines and I found, for the most part, the wines to be very promising.  Riesling, Muscat and Gewürztraminer all had bright, fresh and fruity aromas.  My notes indicate Schmitt changed to "whole cluster pressing" for the 2001s, which may, in part, account for the finesse of a number of the wines. 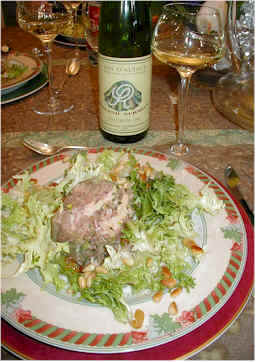 Anne Marie is capable in the kitchen, too.  After our tasting of the 2001s in the cellar and the 2000s in the winery tasting room, we adjourned to the house for further research: how the wines fare with food!
She paired a 1993 Sylvaner, a wine most people would never expect to still be worth drinking, with a Frissee salad topped with toasted pine nuts, golden raisins and some of her homemade pat.
The wine was wonderful, having a youthful color and still some interesting floral notes on the nose and palate. 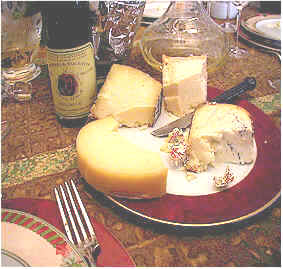 A 1993 Riesling "Glintzberg" was outstanding!  The wine has a wonderful depth of fruity and it's still fresh and vibrant.  Some hints of dried flowers and a note of petrol are present on the nose. 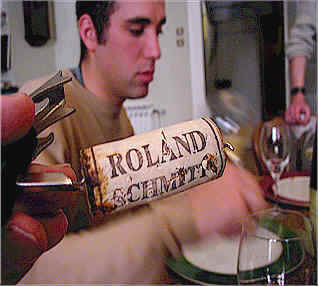 A 1995 Tokay Pinot Gris Altenberg had the fruit and spice notes I associate with that varietal.  Though 6+ years old, it was youthful and complex. 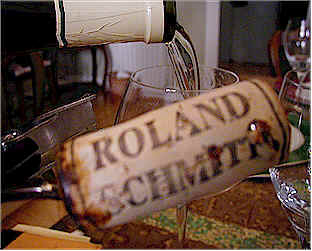 I felt the 1997 Riesling Altenberg (Vieilles Vignes) was just about at its peak.  The wine, with a light bit of residual sugar, showed a touch of a minerally note and it's lightly floral.
Anne Marie explained the famous restaurant Crocodile serves one of her older Rieslings with a Parmigiano and Aceto Balsamico course. 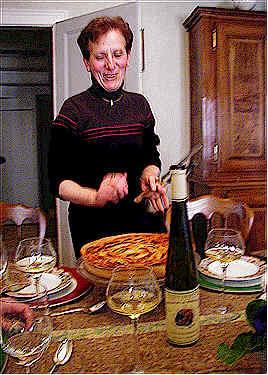 A fruit-tart from the Patisserie Anne Marie was outstanding! ~~~ So was the 1990 Gewrztraminer Altenberg "Grains Nobles".  The wine was rather deep yellow in color, with a fabulous aroma of honey, roses and other flowers, not to mention the lychee notes.  A three-star wine, without question!